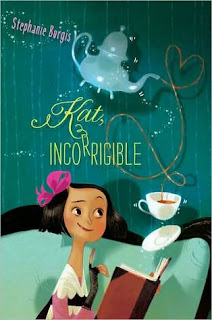 By: Stephanie Burgis
Published by: Atheneum
Released on: April 5th, 2011
Source: Bought
5 stars: A Magical Read
Katherine Ann Stephenson has just discovered that she's inherited her mother's magical talents, and despite Stepmama's stern objections, she's determined to learn how to use them. But with her eldest sister Elissa's intended fiancé, the sinister Sir Neville, showing a dangerous interest in Kat's magical potential; her other sister, Angeline, wreaking romantic havoc with her own witchcraft; and a highwayman lurking in the forest, even Kat's reckless heroism will be tested to the upmost. If she can learn to control her new powers, will Kat be able to rescue her family and win her sisters their true love?
Take some magic, sprinkle in an old fashion English society that I adore, and add an unforgettable character and you've got a recipe for a fantastic read that will be appealing to both middle graders and adults, or maybe adults who are really just kids at heart.

There's something about Kat Stephenson that will have you falling in love with her. She's a memorable character who's fresh voice and sweet innocence had me cheering for her through out the book, because no matter what her consequences are she always did what she thought was right. In an era where girls are suppose to do what they are told, and be prim and proper, twelve year old Kat is an spunky, do it yourself, strong willed, fun loving girl. Not one to always follow the rules or do what she's told to, Kat is adventurous, loyal and despite always have the best intentions for her actions, she often finds herself in a bit of mischief. How can you not love a character who's opening line is,

"I was twelve years of age when I chopped off my hair, dressed as a boy, and set off to save my family from impending doom."

One of the things I loved about Kat is she doesn't give up. She wants nothing more than to find out more about the mother she never knew, and help her older sisters, who in the story's time period are about to be married off, unwillingly I might add. Through Kat's mishaps of trying to save her sisters, she discovers she's inherited her mother's magic powers. Upon picking up a mirror that belonged to her mother Kat finds herself teleported into a world that may give her the answers she's looking for. This magical discovery is just the beginning of Kat's adventures, as she discovers her powers, and what she's capable of.

Aside from a cast of great characters is a beautiful setting that I couldn't help but picture in my mind. Stephanie did such a wonderful job at describing not only the 1800's English society, what it was like to attend a ravishing English house party, the attire, and what it was like to be a girl then. I felt like I was visiting this time period, and I loved every moment of it. Kat, Incorrigible is a charming, delightful read, and I'm looking forward to reading about many more of her adventures.
Posted by Mundie Kids at 10:03 AM Labels: 5 stars, Atheneum, Book Review, Kat Incorrigible, Simon and Schuster Kids, Stephanie Burgis

Congratulations to our recent Giveaway Winners!
Jack Blank & The Secret War ARC:
#19- Grace Soledad
Petal Pushers, Too Many Blooms:
#14- Kathy Tope
All winners have been notified. Thank you to everyone who has entered and we'll be posting more giveaways shortly!
Posted by Mundie Kids at 9:50 AM Labels: Mundie Kids Giveaway Winners