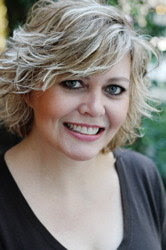 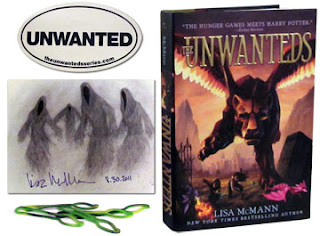 You do not want to miss this AWESOME event! On August 30th, Changing Hands Bookstore is hosting a TWEEN event with the lovely Lisa McMann at 7 pm! If I could attend this event, I'd be there in a heartbeat. I adore Lisa and this book is a MUST HAVE!

Guess what?! You don't have to be at the event to join in on this special offer! The 1st 100 orders either placed at Changing Hands or pre-ordered before August 25th will RECEIVE:
Prizes are limited to the first 100 readers, so pre-order online now or call 480-730-0205.

Can't make it? For $22 (includes taxes and shipping) we'll ship your prize pack anywhere in the country. Extra for international shipping. Please call for details: 480-730-0205.

PLEASE NOTE: Be sure to include the name of the person you'd like Lisa to personalize the book for in the "Order Comments" field at the bottom of the checkout page. 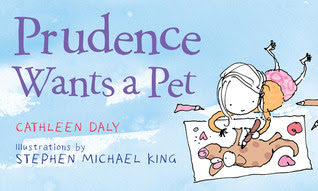 Prudence wants a pet. Desperately. "No," says Dad, "pets cost too much to keep."
"No," says Mom, "pets make noise."But Prudence is determined. She finds her own pet. It is a...branch. But Branch isn't exactly the pet of her dreams, and neither are Twig, Mr. Round (a car tire), or her baby brother Milo. Poor Prudence. Will she ever find the perfect pet?

A cute story that caused a lot of laughter and has some great illustrations.

Prudence desperately wants a pet, and no matter how many times she asks she's constantly told no. Using her imagination, Prudence decides to adopt various things around her house and make them her pet, and in the end a tree branch, a shoe, her little brother and even a tire aren't very fun pets. Who doesn't want to have a loyal campion with them?

This is a delightful read that kids will really enjoy. It's a story both kids and some adults alike will be able to relate to. Especially if you're someone who grew up wanting a pet. I enjoyed how inventive Prudence was in trying to find the perfect pet. Even though her tree branch, the shoe, her little brother and everything else she finds end up not being the pet she wanted, she's finally granted the perfect pet from her parents for her birthday. With the endless possibilities on what it could be, you'll have to go pick up Prudence's story to find out what she received. I can tell you it's not a branch, a shoe, her little brother or a tire.
Posted by Mundie Kids at 3:39 PM Labels: 4 stars, Book Review, Cathleen Daly, MACMILLAN, Prudence Wants A Pet, Roaring Book Press, Stephen Michael King