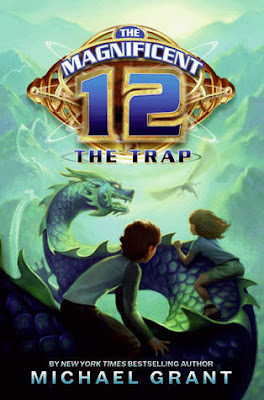 By Michael Grant
Published by Harper Collins Children's Books
To Be Released on August 23rd, 2011
Source: ARC from publisher to review
Ages: 10 & up
4.5 stars- I Really Enjoyed This Book

In the thrilling second book of the Magnificent 12 series, Mack MacAvoy is challenged by his spectral mentor, Grimluk—who only appears in the shiny chrome pipes of bathrooms.

Mack must find the ancient ones, the great forgotten forces.

Time is short! The wicked Pale Queen’s three-thousand-year banishment ends in thirty-five days, and she will be free to destroy the world. It’s up to Mack to stop her return. But what do all of Grimluk’s clues mean? Can Mack achieve everything he must do without getting killed by the evil Risky—and escape the trap?

The Magnificent 12: The Trap is another fast-paced episode in bestselling author Michael Grant’s hilarious fantasy-adventure series.

A fast paced, action packed adventure with some unforgettable characters, The Trap is a wonderful sequel to The Magnificent Twelve. Michael Grant has created a series that whisk's readers into a fabulous world mixed with a rich mythology, intriguing mythological characters and creates a story line that's both fun and engaging.

This time Mack and his friends travel from China to Germany in their continued quest to find the rest of The Magnificent Twelve and defeat the Pale Queen. Along the way they meet or should I say get attacked by some rather interesting characters. One of my favorite new characters is Xiao, who's also featured on the front of the book. I loved being introduced to Xiao and her dragon family. I was really surprised with how much Mack has grown as a character. While he still deals with all his phobias, he's also learned to think things through more. Mack also provides a lot of the comical relief in the story with his tongue in cheek comments. I found myself laughing out loud more than a few times. Stefan's character keeps getting better and better.

I like that the world of The Magnificent Twelve continues to become much more creative. New characters are introduced, and like the first book, The Trap has a great back story that parallel's with Mack's adventures via the story's bad guy. I like the way Michael Grant introduces Nine Iron, and allowed me to see why he's bad, and why he's after Mack. The Trap is a fabulous addition to a series I highly recommend picking for MG readers. There's a lot more humor in it, the characters have become much more in-depth, and the action is non-stop.

Head over to Mundie Moms, as we've got a great blog tour stop with Mack today!
Posted by Mundie Kids at 9:22 AM Labels: 4.5 stars, Book Review, Harper Collins Childrens, Michael Grant, The Magnificent 12 The Trap