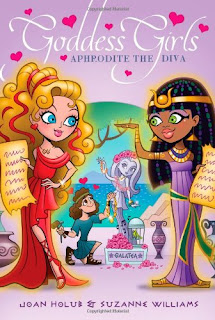 In book 6, an exchange student from Egypt, Isis, is encroaching on Aphrodite's match-making turf. Will she also edge Aphrodite out of her group of friends?

These classic myths from the Greek pantheon are given a modern twist that contemporary tweens can relate to, from dealing with bullies like Medusa to a first crush on an unlikely boy.

Goddess Girls follows four goddesses-in-training: Athena, Persephone, Aphrodite, and Artemis and their friends as they navigate the ins and outs of divine social life at Mount Olympus Academy, where the most privileged gods and goddesses of the Greek pantheon hone their mythical skills.

I really adore this series. The Goddess Girls is a fun series that allows young readers a chance to get to know the young Greek Goddess and Gods, while sharing empowering messages with it's readers. In past books the messages have been about being true to yourself, loyalty, being strong, being a true friend and being proud of who you are. With each book, the characters deal with much of the same things or similar things their readers do. These young Gods and Goddess learn to deal with fitting in, first crushes, new friendships, dealing with bullies, school life and finding out who they are. I love that as the series continues, we not only see more of the characters, but with each new book a different Goddess Girl tells the story.

I adore Aphrodite! Aphrodite is the school's main diva and resident match maker. Aphrodite gains a new rival, who's just a good at match making as she is when Isis from Eygpt arrives. Aphrodite and Isis have a lot of the same qualities and while they're both competing against each other, they don't stoop to the level of being mean towards each other. I really admired that about the two characters. Even with all the rumors that are going around about them, they still maintain a level of respect towards each other which keeps their competition friendly, when it could have quickly become turned into something ugly.

I really enjoyed getting to know Aphrodite. She definitely reminds me of friends I had in school who wanted to match their friends up with boys they thought were cute. Aphrodite does a great job with her matches. She's a fun character to get to know. I'm hoping we'll get to see if her matches are still going strong as the series continues. I love that this series keeps the romantic part of the story very age appropriate. It's refreshing to see how these sweet, innocent crushes can turn into something a little more. This is a series I'd recommend to readers 8 & older. It's clean cut, fun and one that parents don't have to worry about what kind of subject matter their kids are reading. I'm looking forward to having my daughter read this series.
__________________________

Here's a complete list of books you can find in The Goddess Girls Series: