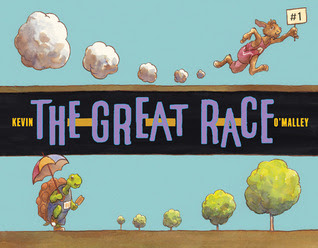 Written & Illustrated By: Kevin O'Malley
Published by: Bloomsbury Kids
To Be Released on:
Source: book from publisher to review
Ages: 5 & up
4 stars- It's A Fun Read
Purchase from: Amazon| Barnes & Noble

Nate Tortoise is tired of living in the shadow of Lever Lapin. He can't go anywhere or do anything without hearing about the great exploits of that pesky hare. And Lever's head has grown to match the size of his entourage. It isn't until Nate challenges Lever to a race that this hare is put in his place . . . giving new meaning to the phrase "slow and steady wins the race." Kevin O'Malley fans will cheer all the way to the finish line for this clever twist on the beloved fable.

This is really fun, updated retelling of a beloved tale, The Tortoise and the Hare.

Nate Tortoise is trying to enjoy a peaceful meal when the quiet restaurant he's eating at turns into excitement over the entrance of Lever Lapin. Lever claims to be the greatest, fastest racer around. He's also not very humble or as smart as Nate, so when Nate challenges him to a race he gladly accepts.

This race is much like the classic story. The hare, Lever Lapin is speedy and leaves Nate in the dust. Unlike the hare who falls asleep, Lever Lapin can't pass up an opportunity to talk about himself with his fans. In so doing he misses his chance to beat Nate at race that clearly was one Lever should have won.

I think this is story that elementary school aged kids would enjoy, as well as parents. Kevin adds enough humor to the story for adults to enjoy, and keeps his text and story to a length that will keep young readers engaged with his story.
Posted by Mundie Kids at 3:48 PM Labels: 4 stars, Bloomsbury Children's Publishing, Book Review, Kevin O'Malley, The Great Race