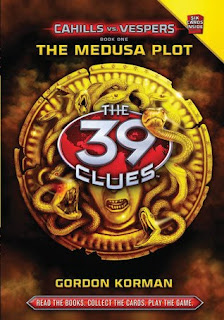 By: Gordan Korman
Published by: Scholastic
Released on August 30th, 2011- TODAY
Source: ARC from publisher to review
Ages: 8 & up
5 stars: A Fabulous New Installment to the 39 Clues Series
Purchase from: Scholastic| Amazon

Are you ready to save the world? The bestselling series returns with an adventure spanning 6 explosive books, 2 secret-filled card packs, and a website that places readers right in the action.

Thirteen-year-old Dan Cahill and his older sister, Amy, thought they belonged to the world's most powerful family. They thought the hunt for 39 Clues leading to the source of that power was over. They even thought they'd won. But Amy and Dan were wrong.

One by one, distress calls start coming in from around the globe. Cahills are being kidnapped by a shadowy group known only as the Vespers. Now Amy and Dan have only days to fulfill a bizarre ransom request or their captured friends will start dying. Amy and Dan don't know what the Vespers want or how to stop them. Only one thing is clear. The Vespers are playing to win, and if they get their hands on the Clues . . . the world will be their next hostage.

An exciting, new, action packed series from the creators of 39 Clues, The Medusa Plot brings together the Cahill family for a thrilling new adventure. The Cahills are the most powerful family in the world, and things look like they're about to change when one day, different family members are kidnapped at various places through out the world. Now their lives hang in the balance of Amy & Dan's hands.

I really liked being thrust right back into the adventurous, mysterious world that is all to familiar to Dan and Amy. The story line was engaging, and full of some surprising twists. I really liked how some of the help Dan and Amy receive came from some unexpected characters. This adventure sends Dan and Amy around the world on the hunt for the famous Medusa painting. If that wasn't bad enough, they've got a time limit or one of their family members who's being held captive gets shot. Vesper One isn't someone they want to mess around with, especially since he's been holding a grudge against the Cahill family for a couple hundred years.

Book 1 is full of action packed scenes, daring adventure and builds up the excitement of what's to come with the rest of the series. I can hardly wait to find out what other assignment Vesper One has instore for Amy and Dan. This is definitely a book that fans of 39 Clues need to pick up!

Thank you to Scholastic, we're giving away 1 signed copy of The Medusa Plot to one lucky follower! To enter:

- You must have your parents/guardian's permission if you're under 13 yrs old
- Residents of the US only
- 1 entry per person
- This giveaway will end on SEPTEMBER 17th, 2011