I posted my review for The Unwanteds yesterday on Mundie Moms, but this truly one of those amazing MG reads that I had to also share with you guys on here as well. 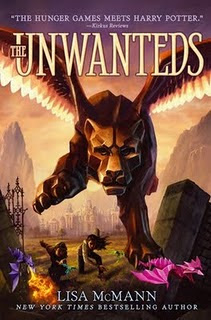 Every year in Quill, thirteen-year-olds are sorted into categories: the strong, intelligent Wanteds go to university, and the artistic Unwanteds are sent to their deaths.

Thirteen-year-old Alex tries his hardest to be stoic when his fate is announced as Unwanted, even while leaving behind his twin, Aaron, a Wanted. Upon arrival at the destination where he expected to be eliminated, however, Alex discovers a stunning secret—behind the mirage of the “death farm” there is instead a place called Artime.

In Artime, each child is taught to cultivate their creative abilities and learn how to use them magically, weaving spells through paintbrushes and musical instruments. Everything Alex has ever known changes before his eyes, and it’s a wondrous transformation.

But it’s a rare, unique occurrence for twins to be separated between Wanted and Unwanted, and as Alex and Aaron’s bond stretches across their separation, a threat arises for the survival of Artime that will pit brother against brother in an ultimate, magical battle.

There's just something about a middle grade book that I love. These books allow my imagination to sore, they take me on incredible adventures, and they make the unbelievable believable. There's something about them that appeals to my inner child or maybe it just reminds me of how magical and exciting it is to open a book and immediately get whisked away to do a whole new world that I never knew existed. Middle grade books are truly appealing and magically to readers of all ages. The Unwanteds is one of those books readers of all ages will fall in love with.

The Unwanteds is a story where the impossible becomes possible. In a world where those who have artist talents are considered Unwanteds, twin brother Alex is an Unwanted, and sentenced to death, while his Wanted brother Aaron is taking off to be trained with the few other intellectual geniuses from their town of Quill. Alex's is in for a huge surprise when he arrives to the Death Farm expecting to meet his doom and instead finds a whole new unimaginable world awaits him.

I thoroughly enjoyed getting to know the unique cast of characters that awaits Alex in Artime. One of my favorites is Mr Today, the magician who created Artime. He's purpose is to teach the children who arrive in his world, to protect themselves and the new world they're now apart of. He's full of wisdom and a few secrets. He sees the potential in each of the kids and excepts nothing but the best from them. I also loved Simber, the talking winged cheetah statue, the talking wolf Gunnar, Octavia, Clive Alex's talking board, Megan, Claire, Lani, Samheed and my list could go on and on. There's such a creative mix of magicians, humans, talking animals and creatures that exist within the pages of The Unwanteds. The characters are so well written and believable, even the bad characters, who's motives I was able to understand.

Alex of course steals the spotlight. He goes on such an incredible journey from feeling second best to believing in himself and his determination is something that I admired about him. His character arc in the story is wonderful and he's someone that a lot of MG readers will really enjoy getting to know. There are so many things I want to gush about with The Unwanteds. The incredible writing, the believable characters, the fantastic world building. One of the things I love about Lisa's writing and The Unwanteds is how everything within the story ties together and the unexpected twists that happen through out the story, and especially towards the end. What an engaging read! From the beautiful, hidden world of Artime to the cast of unforgettable characters, this is a story I want to sit and read again.

Lisa McMann has created an amazing world full of magic with talking animals, talking statues, flying paper dragons, and gave us a thrilling adventure while introducing us to some characters that we'll want to go back and visit again and again. The Unwanteds is a whole new classic fantasy adventure I highly recommend picking up. It's a story that middle grade readers, and readers of all ages will enjoy. I can not wait to read more of this unforgettable series!