This is another one of those books I've reviewed on Mundie Moms this week that I highly recommend picking up for MG readers. Erin Dionne has written a book that readers 10 yrs old & older will enjoy. It's one that band geeks, soon to be band geeks, ex- band geeks, wanna be band geeks and people like myself whom weren't band geeks (but now wish I was) will enjoy. This book is clean cut, hilarious and an all around fabulous read! 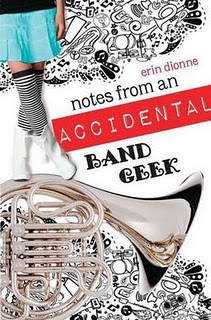 By: Erin Dionne
Published by: Dial Books for Young Readers
To Be Released on: September 1st, 2011
Source: Book from publisher to review
Ages: 10 yrs old & up
4.5 stars- I Really Enjoyed It
Purchase from: Amazon| Barnes & Noble

Elsie Wyatt is a born French horn player, just like her father and her grandfather before her. In order to qualify for the prestigious summer music camp of her dreams, she must expand her musical horizons and join - gasp! - the marching band. There are no French horns in marching band (what the heck is a mellophone??), but there are some cute boys. And marching band is very different from orchestra: they march, they chant, they . . . cluck? Elsie is not so sure she'll survive, but the new friends she's making and the actual fun she's having will force her to question her dad's expectations and her own musical priorities.

This book was not at all what I was excepting it to be, it was so much better! Talk about a fun, enjoyable read with a main character who's sarcasm, awkward social challenges and desire to enjoy her own life and relish in the moment, made for a story that was both entraining and relatable.

I played band for one year in middle, but have no idea what it's like to be in band in high school, let alone the marching band, but reading Elise's story gave me more of an insight to what they do. Erin Donnie's has created such a realistic portrayal of what it's like to be apart of this club. You don't have to be a band member to appreciate Elise's story. She's a character who's fun to get to know as she struggles with wanting to step outside of her parent's goals and aspirations for her, and discover her own goals and want she wants to do. Along the way she learns a lot more about herself and what it means to be a true friend.

Elsie is a bright, highly intelligent character who has an amazing talent as a french horn/mellophone player, but she seriously lacks people skills. I admired how disciplined she is with her band practice, but until now, this poor girl did not know to how fun. Her story brought back a lot memories of high school and I liked the way Erin did a fabulous job at incorporating what it's like to start high school. The meeting of new friends, making a good impression, not messing up when it's your first performance with the marching band (which I have never done), trying to find your niche in life and at school as well as learning how to deal with the on going struggle with your parents who seem want to still see you as a little and not as an adult. I adore Elise's Marching Band friends. They are funny, and such a great support for Elise. I also like they're all able to relate to each other in so many ways, especially with how hard each of their parents are on them.

Erin's writing is fabulous! She grabbed my attention from the get go and I really enjoyed reading this book. This is truly one of those fun, quick reads that left me feeling like I truly missed out on all the fun of Marching Band in high school. Oh, I can't forget to mention the sweet little romance that happens in the story. This is one of those realistic, clean cut and dare I say it, charming books that middle graders, teens and older YA fans will like. I highly recommend picking up this book!
Posted by Mundie Kids at 5:00 PM Labels: 4.5 stars, Book Review, DIAL BOOKS FOR YOUNG READERS, ERIN DIONNE, NOTES FROM AN ACCIDENTAL BAND GEEK