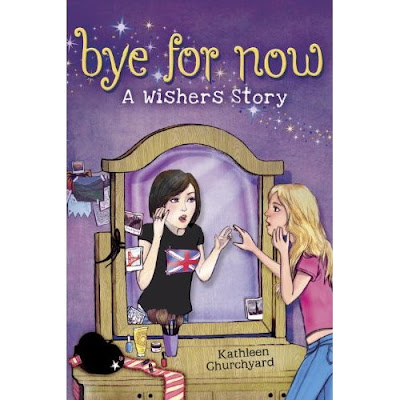 The candles dripped onto the icing as Robin deliberated. What could she possibly wish? She wanted to wake up the next day and learn all her problems were gone. But since her problems weren’t going to disappear, she didn’t want to be Robin anymore.

“I wish I was somebody else,” Robin wished. And in that moment, she meant it. She blew out the candles.

After the worst eleventh birthday ever, Robin wakes up the next morning in the body of Fiona, an eleven-year-old girl from London with an amazing life. Fiona is gorgeous, with glamorous parents, and she’s the star of a major theatrical production. Why would Fiona have wished herself out of her own body? Slowly, Robin discovers a whole network of girls like her—girls who have gotten their wish and are living somebody else’s life. But what happens when Robin finally decides she wants to go home? Does anybody in the Wishers network know how to make this happen?

In this exciting first novel, Kathleen Churchyard asks: What if you wished for someone else’s life—and it came true?

I'm really excited to have debut author, Kathleen Churchyard with us today to talk about her new book, Bye for Now, A Wishers Story.

I am really excited about reading your upcoming release, "Bye for Now, A Wishers Story". I think a lot of ten-eleven year old readers will be able to relate to Robin. When you were Robin's age did ever wish to have someone else's life? If so, what sort of life did you wish you had?

First of all, thanks for sharing my excitement about "Bye For Now." Regarding inspiration, the idea was based on my daughter Emma, who was eleven at the time. She'd had a truly AWFUL week, most of which I've immortalized in the book (I'm sure she's grateful. At least eventually. Maybe.) Anyway, she was sitting glumly in the car after the dreaded conference swim meet, with a black eye and having lost the meet and been dumped, all in the same day. She wondered aloud what her life would be like if she'd grown up in England instead of the U.S. My husband's British, so the setting for her fantasy was a natural one for her.

Anyway, the moment she said it, I absolutely sparked. "That's a cool thought. Let's think about what that would look like." I was absolutely entranced, remembering how many times I'd wished to be someone else at her age. Unlike Emma, I struggled socially every day, not as a one-off. So wishing I was someone else wasn't just a passing thought for me -- I'd mapped it out, many times. I loved travel and I performed in the theater a lot as a kid, so I constantly imagined myself as a big star in another country. I was sure if I just got far enough away from home, I'd be wildly successful, because those strangers wouldn't know what a loser I'd been.

Ironically enough, I went back to my 25th high school reunion last fall, having just finished my edits on "Bye For Now." Wouldn't you know -- even the most popular girls from school heard my story and confessed they'd made the exact same "somebody else" wish at some point growing up. I wonder when the grass stops looking greener on the other side of the street?

What is something you feel you and Robin/Fiona have in common?

Robin is predominantly based on Emma, but some traits you just can't help but pass along, can you? I share Robin's constant thirst for adventure of any kind. Robin wakes up in London, and she's scared, but she's excited too -- peering around, wanting to drink in every sight and put every experience between her fingertips just to see what it feels like. Even when she's faced with something she's never done -- performing onstage -- she doesn't refuse out of fear, like a lot of kids would. Robin would rather fly a little too close to the sun and fall, rather than not fly at all out of fear. Good or bad, I've always been that impetuous.

If you were Robin's mother, and knew what she was feeling before she made her wish, what is one thing you'd want to tell her?

Well, my daughter DID make this wish. I immediately assured her everyone feels this way at some point, because everyone has problems. I knew she'd argue the point, and I know she won't entirely believe me for many years. But the fact is, self-awareness arrives at this age, as magically and mysteriously as a wish. Kids just wake up one day and suddenly notice their friend of the last five years at elementary school is fat -- as if it just happened. And someone else has a funny odor. And kids are often cruel without meaning to be -- they're only saying it initially because they've never noticed before. But then someone laughs, and it's game on. It's a hard time, especially for girls, since there's such a stigma attached to a girls' physical appearance. If you're tall, you'd like to be shorter, and vice versa. If you're not yet developing, you wish you were, and again, same's true the other way around. The list goes on endlessly, because no matter what you look like at this age, someone's pointed out a flaw, real or imagined. You never stop to question whether or not it's true, because you're still trying to process why you never noticed this stuff before.

If I can get one message across to eleven year old girls it would be this: Remember that every day is perfect magic. You will wake up tomorrow -- and the day after -- as a Wisher. Every one of you. Because your life, your looks, and your thoughts will all be a little different than they were the day before. And that's scary, but it's infinitely exciting too.

I like that London is part of Bye for Now's setting. Are there any places that you've visited in London that helped inspire your setting? If so, what is one of your favorite places you visited?

I received a writing scholarship to go to the University of London for a semester in college. On my first day in London, my theater professor, Sheila Fox, took us to to see Antony and Cleopatra, starring Sir Anthony Hopkins and Dame Judi Dench at the National Theatre. I was smitten from that day on, so much so that Sheila asked me if I'd like to return to London to do an internship at the Royal Court Theatre, the national theatre of new writers. I jumped at the chance and lived in London for two years after college. (Sheila became the basis for Mrs. Walker in the novel.) I lived in a brownstone near Queen's Park, where the story is set, and rode the buses every day past Baker Street en route to the Royal Court and then the Royal National Theatre. I love London, and have many favorite sights (so many I didn't get to use them all) but my favorite experience was by far walking into that cold damp theater every morning, watching the grips ready the set, the actors do warm-ups, everyone stomping around, attempting to dry off from the rain.

What were some of your favorite books to read growing up?

My love of words began with Dr. Seuss, my love of fantasy is derived from irreplaceable hours spent reading A Wrinkle in Time and The Lion, The Witch and the Wardrobe. As I got older, The Catcher in the Rye and Jane Eyre both spoke to the misfit in me. Finally, my love of English literature and culture is born and bred from every delicious word Jane Austen ever wrote. I'd read all her books by the time I was fourteen, and I still read them all in succession, once every two years. (Emma is named for my favorite Austen heroine.)
____________________________________

Thank you so much for joining us today Kathleen!

Purchase the book: Bye For Now A Wisher's Story from EgmontUSA & Amazon

About The Author:Kathleen Churchyard has lived in many glamorous places, including London, San Francisco, and Washington, D.C., but she is very happy to call North Carolina her home right now. She lives there with her husband, Paul, and her daughters, Emma and Rowan. She wrote screenplays for Hollywood studios for almost twenty years, and Bye for Now is her first novel.