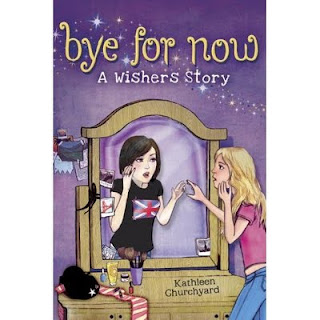 By: Kathleen Churchyard
Published by: EgmontUSA
Released on: August 23rd, 2011
Ages: 10 & up
Source: book from publisher to review
4 stars- I Really Enjoyed It
Purchase from: Egmont USA| Amazon
The candles dripped onto the icing as Robin deliberated. What could she possibly wish? She wanted to wake up the next day and learn all her problems were gone. But since her problems weren’t going to disappear, she didn’t want to be Robin anymore.

“I wish I was somebody else,” Robin wished. And in that moment, she meant it. She blew out the candles.

After the worst eleventh birthday ever, Robin wakes up the next morning in the body of Fiona, an eleven-year-old girl from London with an amazing life. Fiona is gorgeous, with glamorous parents, and she’s the star of a major theatrical production. Why would Fiona have wished herself out of her own body? Slowly, Robin discovers a whole network of girls like her—girls who have gotten their wish and are living somebody else’s life. But what happens when Robin finally decides she wants to go home? Does anybody in the Wishers network know how to make this happen?

In this exciting first novel, Kathleen Churchyard asks: What if you wished for someone else’s life—and it came true?
Have you ever had one of those days were everything that could go wrong does? At the end of the night as you reflect upon how horrible your day was you wish you could be someone else? That's exactly what happens to eleven year old Robin, who's birthday ended up being a disaster. When she awakens the next morning she finds she's not only switched places with someone else, she's now someone else who lives in England! I don't know about you guys, but that would be awesome, that is until I realized that Robin now has to figure how in the world she got there, how to undo what just happened and she has to learn to be Fiona, the girl she's now become. Not to mention she has to quickly learn the different phrases they say in England. So, maybe that's not so fun.
What Robin is about to discover is that she's now apart of a secret group called Wishers. She's not the first one, nor will she be the last one who wishes she was someone else and has that wish come true. The key is finding the person who switched places with her and figuring out how to undo the wish. One of the things I really loved about the story is Robin's interaction with the group of other wishers, who like her are trying to not only fit into their new lives how ever long or temporary it may be. They all must work together to solve the mystery on how to undo the wish. In the process a little more about each girl is revealed, and of course not all the girls are nice, and some will do whatever it takes to stay someone else.
I loved that most of the story is set in England and his royal highness, Prince William even makes an appearance! London is one place I've always wanted to visit, and Kathleen does a fantastic job at bringing the setting to life in her debut. I also liked the twist with some of the characters, and how each wisher ends up somewhere different around the world. I really liked Robin. She's a normal tween girl who tries to make the most of the situations she finds herself in. I found her easy to relate to. What eleven year old girl doesn't have some feelings of insecurities, like Robin did. It's a tough age and I really liked the powerful message that Kathleen enfolded into Robin's story about being proud of who you are.
Any eleven year old girl would always find fault with herself, every time. And that same elven year old girl would aslo find perfection in some other girl and wish she was that girl. But no amount of wishing yourself into someone else's life and body would make it better. You'd just keep finding fault with you you were, and somebody else' life would still look better than yours. There was no magic in being somebody else- the true magic was in discover who are you already are. - page 257
Then again on page 261 Robin thinks,
Sure, there were going to be girls who were maybe prettier, more popular, smarter, or even more talented than herself, and sometimes their live might look better than her own. But they weren't. In fact, chances were that girl, whoever she might be, would be comparing herself unfavorably to someone else at the same time.
To be successful at being elven years old, Robin decided, you had to look forward to each change in who you are, where you are, or what you look like. You had to think of each and everyone as a new adventure. Because of of those changes are going to be pretty good. And some will be great.
What an enjoyable read. There's a fun adventure in wishing, a cast of great characters is introduced and the story ends on a fabulously twisted cliff hanger. I'm really looking forward to reading more of Kathleen's books and I hope there's at least one more Wisher's book to come. I want to know which girls learn their lesson and which girls are still out there wishing to stay someone other them who they really are. This is a book I'd highly recommend to tween readers!
Don't miss my interview I had with Kathleen last week here.
Posted by Mundie Kids at 10:00 AM Labels: 2011 Debut Author Challenge, 4 stars, Book Review, Bye For Now A Wishers Story, EgmontUSA, Kathleen Churchyard