Interview with The Familiars: Secrets of the Crown characters

Happy Release Day to The Familiars: Secrets of the Crown! I LOVE this series! If you're looking for a middle grade series that has adventure, magic and talking animals, than you MUST kick up The Familiars. Today is the release day for the sequel, The Familiars, Secrets of The Crown.
I'm so excited to have the three main characters, Aldwyn (the cat), Gilbert (the tree frog) and Skylar (the bird) with us today! 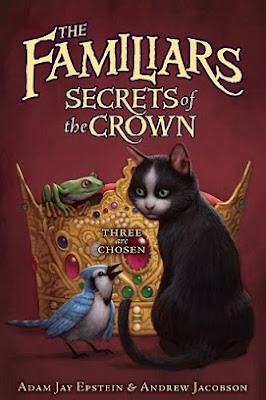 By Adam Jay Epstein & Andrew Jacobson
Published by Harper Children's
Released- TODAY!
A curse befalls Vastia, eliminating human magic. Only animals are able to cast spells, and it is up to Aldwyn, Skylar, and Gilbert to save the queendom from the evil threatening it. In addition, Aldwyn discovers the truth about his past, embarking on a journey that brings him closer to the father he never knew.
I LOVE this series! If you're looking for a middle grade series that has adventure, magic and talking animals, than you MUST kick up The Familiars series!
Aldwyn
We really enjoyed meeting you and getting to know you in The Familiars. What's it like being a Familiar?
Oh, it's pretty exciting. Nothing like being an alley cat in Bridgetower. Back then the most exciting part of my day was finding what I'd be eating for breakfast in the garbage. Now I'm assisting a wizard and going on crazy adventures across the land!
Are you able to tell us a little bit about your adventures in Secrets of the Crown?
You're not working as a spy for Paksahara, are you? No. Okay, in that case, all of human magic has disappeared in Vastia, and it seems the only way to bring it back is for Skylar, Gilbert, and I to find the Shifting Fortress. And the only way to do that is with the Crown of the Snow Leopard. I think I've said too much already.
How has your journey to find your father changed you?
Following in another's paw prints -- especially someone like your father's -- can lead to some pretty amazing discoveries.
Gilbert:
How would you describe your newest adventure in three words or less?
Friendship. Surprises. Indigestion.
If you could trade places with another animal for one day, what animal would you want to trade places with?
A koala bear. All they do is eat and sleep. How could get any better than that?
What's your favorite spell to cast and why?
Me + spell casting = bad combination. Have you seen how many toes my right foot has? I guess you'll just have to read the book.
Skylar:
What do you enjoy most about traveling with Aldwyn and Gilbert?
Gilbert always makes me laugh even when I feel down. And Aldwyn's the most loyal friend I could ever have.
If you could have one day to yourself, what would you want to do?
Bring my dead sister back to life. Is that too heavy? I also enjoy a nice bird bath.
What's the best thing about being a Familiar?
Learning spells. I love magic. Plus I wouldn't give up my loyal for anything in the world.
_____________________________________
Thank you so much you guys for joining us today! We're looking forward to your next adventure and in the mean time, we hope you're able to get a little bit of rest.
I'll be posting my review later today for The Secrets of the Crown.
Be sure to visit the Familiars on their website, facebook & twitter!
You can order the book from Amazon| Barnes & Noble
Posted by Mundie Kids at 8:12 AM Labels: Adam Jay Epstein, Andrew Jacobson, Mundie Kids Interview, Secrets of the Crown, The Familiars