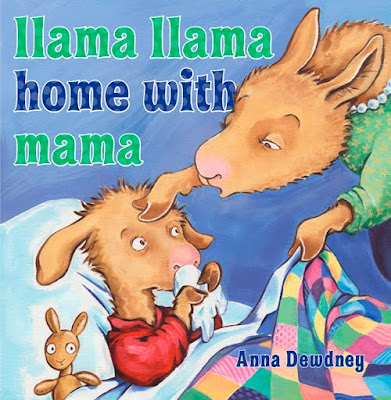 Ah-choo! Uh-oh, Llama Llama's nose is feeling tickly, his throat is feeling scratchy, and his head is feeling stuffy. Back to bed, no school today for Llama Llama! Instead, he's home with Mama. By lunchtime, though, he's beginning to feel a tiny bit better. But now someone else has the sneezes . . . Mama! And who will help her feel better? Why, Llama Llama, of course! Anna Dewdney's fun-to-read rhymes are sure to help children and their parents get through those under-the-weather days.
This series is a huge hit on our house. This is one of those series that's fun, easy to read and just an all around enjoyable book. Anna's newest release is llama llama home with mama, and it's just as heart warming as the rest of the books in the series.
Little llama is home sick from school. His mama does all she can to make him feel better. After lots of loving from his mama, some rest and some yummy food, he starts to feel better. Just as he gets his energy back, he finds his mama isn't feeling too good. Little llama does the one thing he can thing of, he takes care of his mama.
This is such a cute book. It's a story that I sighed and laughed with. As a mom, it's one that I've related to more times that I would like to admit. How many of us parents have spent a day taking care of our little ones only to find them feeling better and full energy before the end of the day, to in turn find ourselves feeling horribly sick. Little llama's reaction to his mama being sick are both sweet and comical. I couldn't help but snicker when he thinks it's boring that he's feeling better and can't do anything, because his mama is sick. He's definitely not being insensitive, because he ends up reading stories and doing things for his mama that she did for him. That of course is what makes this story so heartwarming.
____________________________________
Thank you Penguin, I've got two copies for this story to giveaway, but before you enter, please be sure to check some really great sites for llama llama:
The Websites:
Play Games, Watch Videos & more on the Llama Mama website.
Decorate and Print your own Llama Llama cards here
The Giveaway:
We are giving away 2 copies of llama llama home with mama. This is open to residents of the US. If you're under 13 yrs old, you do need a parent/guardian's permission to enter. To enter, leave us a comment w/ your email address and let us know what's the nicest thing someone has ever done for you when you were sick.
This giveaway will end on September 21st, 2011
Posted by Mundie Kids at 12:04 PM Labels: 5 stars, Anna Dewdney, Blog Tour, Book Review, llama llama home with mama, Penguin Young Readers Group