Freebie Friday- The Man In The Moon Giveaway 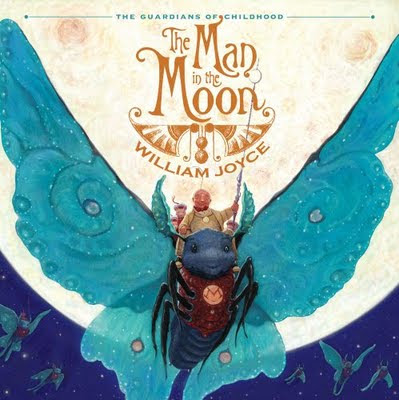 I LOVE this new children's book by William Joyce and I recently had the chance to review it here. Thank you to Simon & Schuster Children's Books, I have two copies I am giving away! First, here's a little bit about the book.
Written & Illustrated by: William Joyce
Published by: Atheneum/Simon & Schuster Kids
To Be Released on: September 6th, 2011
Purchase from: Simon & Schuster| Amazon|
Up there in the sky.

Don’t you see him?

No, not the moon.

The Man in the Moon.

He wasn’t always a man.

Nor was he always on the moon.

He was once a child.

and a lost balloon

sent him on a quest.

MiM, the Man in the Moon.

The Giveaway Rules:
* This is open internationally (internationally winners are required to cover the shipping costs)
* You need to be a follower to enter
* If you are under 13 yrs of age, you do need to have your parent's/guardian's permission before entering
* Please fill out the form below to enter
* This giveaway will end on October 9th, 2011
Posted by Mundie Kids at 11:04 AM Labels: Freebie Friday, Simon Schuster Children's, The Man In The Moon, William Joyce 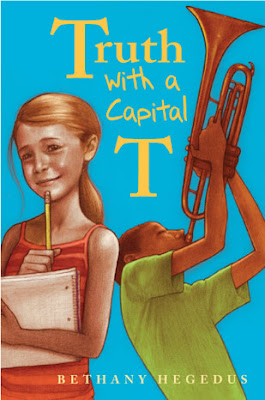 By: Bethany Hegedus
Published by: Delacorte Press
Released on: October 12, 2010
Source: ARC from author to review
Ages: 9 & up
5 stars- I really enjoyed it!
Purchase from: Amazon| Barnes & Noble
Lots of families have secrets. Little-Known Fact: My family has an antebellum house with a locked wing—and I’ve got a secret of my own.
I thought getting kicked out of the Gifted & Talented program—or not being “pegged,” as Mama said—­was the worst thing that could happen to me. W-r-o-n-g, wrong.I arrived in Tweedle, Georgia, to spend the summer with Granny and Gramps, only to find no sign of them. When they finally showed up, Cousin Isaac was there too, with his trumpet in hand, and I found myself having to pretend to be thrilled about watching my musical family rehearse for the town's Anniversary Spectacular. It was h-a-r-d, hard. Meanwhile, I, Maebelle T.-for-No-Talent Earl, set out to win a blue ribbon with an old family recipe.But what was harder and even more wrong than any of that was breaking into the locked wing of my grandparents’ house, trying to learn the Truth with a capital T about Josiah T. Eberlee, my long-gone-but-not-forgotten relation. To succeed, I couldn't be a solo act. I’d need my new friends, a basset hound named Cotton, the strength of my entire family, and a little help from a secret code.With grace and humor and a heaping helping of little-known facts, Bethany Hegedus incorporates the passions of the North and the South and bridges the past and the present in this story about one summer in the life of a sassy Southern girl and her trumpet-playing adopted Northern cousin.
Maebelle T Earl is a southern ray of sunshine! This lovable character is feisty, outgoing and so fun to get to know. The story is centered on her spending the summer, like she always does, with her heartwarming, eccentric grandparents, and her adopted cousin Isaac. I adored her grandparents and fell in love with Isaac. This poor kid broke my heart. He's a character I really came to admire, and though he's only a secondary character, he really stole the show for me.
This story has a rich setting and equally rich back story. Sit in Georgia, Bethany includes the history of slave ownership, the underground railroad, the cost of freedom and so much more into her story. She takes actual facts and events and elegantly makes them apart of Maebelle's family history, and I love how she unravels it. Maebelle is a very bright young girl, but her curiosity gets the better of her when she discovers there's a locked wing in the family mansion her grandparents have recently inherited. She'll do whatever it takes to find out what's in there, and what she finds is a story about love, faith and a quest for freedom.
Mixed with fabulous facts and fun trivia Truth with a capital T is a really fun, engaging read. Not only are the characters well written, and relatable, but each chapter includes a "Little Known Fact" like this one,
"The Truth with a capital T can't always be proved. But for it to be real, it's only got to be believed." - pg 248
Bethany has done such a beautiful job at writing a story that centers around love, friendship, and the true meaning of family. The way she handles the topics of racism and prejudice is truthful and well written so that kids who are reading this story will understand it. It's a story about innocence, finding truth and loving blindly, as in being color blind and seeing people for they really are. It's also a story a historical story with a secret that ties together a family and town.
I highly recommend picking this book up. There are so many wonderful layers to this story that parents and teachers can discuss with their children and students. It's a heartwarming story. It's a fun read that follows the adventures of two kids who are spending the summer together with their grandparents and in the process learn something more about themselves and their family's history. I have to mention the cover, I love it! I'm so glad the artist included both Maebelle and her cousin Isaac. The cover is a perfect match for the story.
Posted by Mundie Kids at 8:01 AM Labels: 5 stars, Bethany Hegedus, Book Review, Delacorte Books, Truth with a capital T