Book Review: Half Upon A Time 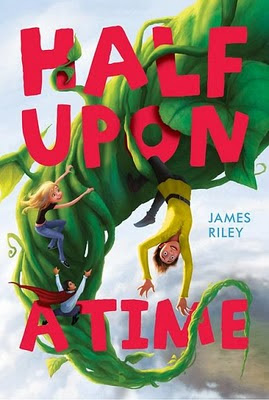 By: James Riley
Published by: Aladdin
Released On: September 7th, 2010
Ages: 8-12
Source: book from author to review
4 stars - I Really Enjoyed It
Purchase from: Simon & Schuster| Amazon| Barnes & Noble| Indie Bound
Life’s no fairy tale for Jack. After all, his father's been missing ever since that incident with the beanstalk and the giant, and his grandfather keeps pushing him to get out and find a princess to rescue. Who'd want to rescue a snobby, entitled princess anyway? Especially one that falls out of the sky wearing a shirt that says "Punk Princess," and still denies she's royalty. In fact, May doesn't even believe in magic. Yeah, what's that about? May does need help though--a huntsman is chasing her, her grandmother has been kidnapped, and Jack thinks it’s all because of the Wicked Queen . . . mostly because May’s grandmother might just be the long-lost Snow White. Jack and May's thrillingly hilarious adventure combines all the classic stories—fractured as a broken magic mirror—into the first of an epic new series of novels for the ages- quoted from Goodreads
James Riley does a brilliant job at throwing in numerous beloved fairy tales and twisting them into an engaging, fast paced plot that both middle grade and adult readers will enjoy. There's action, there's adventure, betrayal and of course plenty of sarcasm and wit that make this a one of kind story.
What's not to enjoy about Jack, the story's main character who's failed his training in how to save princess. He's goofy, funny, clumsy and really just a fun character to get to know. He's someone who's relatable and I really enjoyed the way he grew into the story's hero. Then there's May, the princess who literally fell from the sky and landed in front of Jack and can't remember much other than her Grandmother was kidnapped and she was being chased. This princess isn't your normal damsel in distress, nor is she wearing the normal princess get up. This princess is introduced in style complete with a "Punk Princess" t-shirt and all.
There's a huge cast of fairy tale characters that are introduces through out the story, and they're definitely not the characters I remember reading about when I was younger. I really enjoyed their twists and creative touch James gave to this fun mesh up of stories. One of the best twists is with May's Grandmother. She's not the dear old sweet lady May remembers her to be, and let me just say this granny knows a thing or too about being evil. Or maybe I should say she takes evil to a whole new interesting level.
Half Upon A Time is a fabulously, humorous story full of twisted fairy tales, a grand adventure mixed with two relatable characters that makes for an unforgettable read that will make you laugh out loud and leave you wanting more. I'm really looking forward to reading the sequel, Twice Upon A Time, and I definitely recommend picking this book up!
Posted by Mundie Kids at 6:32 AM Labels: 4 stars, Aladdin, Book Review, Half Upon A Time, James Riley