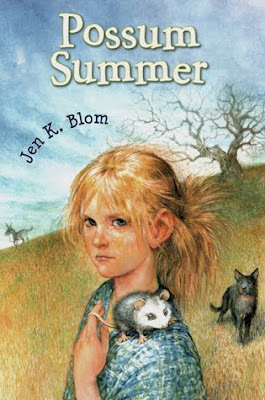 By: Jen K. Blom
Published by: Holiday House
Released on: March 11th, 2011
Ages: 10 & up
Source: from author/publisher to review
4 stars- I Really Enjoyed It
Purchase from: Amazon| Barnes & Noble| The Book Depository
Possum Summer is a heartbreaking novel about a girl and her father whose fractious relationship is healed by the hard lessons they learn about love and letting go. Eleven-year-old P (short for Princess, a name she loathes) longs for a pet, but her father insists that all animals on their Oklahoma farm must earn their keep. While he's away on combat duty in Iraq, P tries to turn his cattle dog into her pet—with disastrous results. Then P rescues an orphaned opossum that she names Ike. She hand-feeds the beguiling critter, smuggles him into school, and teaches him to follow her everywhere. But when her father is reported injured, P knows that before he is shipped home, she must betray Ike's trust and force him to survive in the wild.-quoted from Goodreads
This is a heartwarming story with a realistic portrayal of growing up on a rural farm in the heart of the midwest. Eleven year old P's adventure during one heartbreaking summer are relatable to anyone who's grown up in the country and has learned to deal with love, lost, and growing up.
Young P's summer adventures start when she and her family's dog Blackie, take to the creek bottoms to explore. After all, that's the fun part of living out in the country as a kid even if it's a place she shouldn't be going. This exploration will forever change P's summer, making it an unforgettable one as she ends up adopting a baby possum. That wouldn't be so hard if one, she knew how to care for it and two, there wasn't an epidemic of rabies going on. This young girl isn't one to be deterred and she does whatever she can to save this little guy and what ensues is a bond of friendship.
I enjoyed seeing how P and Ike's relationship bloomed. I for one think baby possums are adorable, but I wouldn't have the drive that P does to take care of it and raise him. There relationship is one that reminded me of my childhood pet and the bond I had with her. By creating this realistic bond of trust and friendship, Jen really pulled at my heartstrings when P has to make the tough choice to protect Ike. Young P is a strong, stubborn character whom I enjoyed getting to know. Her adventures reminded me of ones I took when I was younger. Though I didn't grow up in the heart of Oklahoma like she does, she's a character who's easy to relate to. I admired Young P for her bravery and for taking responsibility for chores and other things that happen around her farm. While her father is at war and her mother works long hours at the hospital, this young girl learns to grow up fast.
P deals with a lot of things in a short amount of time, and without giving much away, I'll just say she made a little teary eyed towards the end of her story. Lucky for P she's got a great support group around her and I adored her best friend and her grandmother. While I'm a little sad P's story is over, I can honesty really enjoyed getting to meet her. I'd definitely recommend picking it up! It's a quick read and one of those stories that reads like the classics we grew up with.
Posted by Mundie Kids at 5:05 PM Labels: 4 stars, Book Review, Holiday House, Jen K Blom, Possum Summer