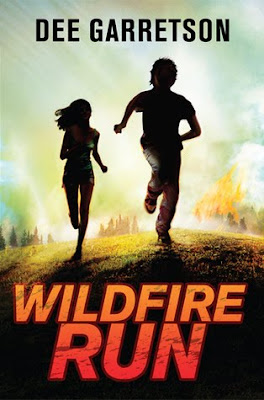 By: Dee Garretson
Published by: Harper Collins Children's
Released on: August 31st, 2011
Age: 10 & up
Source: book from author to review
5 star: A Thrilling Read for MG Readers
Purchase from: Amazon | Barnes & Noble | IndieBound
Just once Luke Brockett would like to do something slightly dangerous, but when your father is the President of the United States, that is not an option. Always surrounded by Secret Service agents and kept in a bubble of safety, Luke sees Camp David, the presidential retreat in the woods of Maryland, as the only place where he can almost normal. For one week in August, Luke's mother has arranged for Luke to have a 'summer camp' experience, if summer camp had only three kids and the counselors carried automatic weapons. The experience comes to a quick end when a forest fire surrounds Camp David. Luke and his friends are trapped inside, left on their own, the Secret Service agents incapacitated, forcing the three to outwit security systems designed to be unbeatable before the fire gets to them -quoted from Goodreads
What an awesome, fast paced, action packed, thrilling adventure! This story is one that just grabs ahold of it's reader and doesn't let them go until the last page. The story centers on Luke, the son of the President of the United States. While on a trip to Camp David with his dad, an destructive earthquake hits MO, causing his father to promptly return to the White House leaving Luke behind with his own secret service men, and his best friend Theodore. While there, a frightening wild fire breaks out and heads straight for Camp David.

This book really played out like watching an exciting movie. One thing after the other happens during this story, from natural disasters, to an accident, that leave part of the team either hurt or separated from each other. Oh wait, I also forgot the run ins with wildlife. Not to mention the fact that one of the big problems is the security that's meant to keep the "bad guys" out, is also keeping the team from leaving. The details of the lay out of Camp David are intriguing and the facts about the camp itself that Dee includes at the end of her story are fascinating. It was so easy for me to imagine what the grounds of this camp look like, as well as the surrounding woods where part of the story takes place.

Wildfire Run is such a high energy, engaging story with fabulously developed characters. The three tweens, Luke, his best friend Theodore and Callie, the chef's daughter we so fun to meet, and as were Luke's own Secret Service men. I loved the ideas that Luke and his friends come up with to help them all escape. Despite how daring and dangerous this mission is, their bravery, intelligence and teamwork are needed to help them figure out away around a high security system. This is a book I highly recommend picking up. I think it's one that even the most reluctant reader will end up enjoying.
Posted by Mundie Kids at 7:46 PM Labels: 5 stars, Book Review, Dee Garretson, Harper Collins Childrens, Wildfire Run