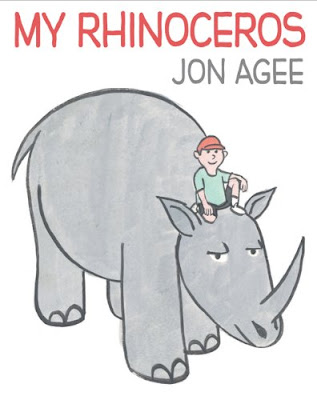 By: Jon Agee
Published by: Scholastic
Released on: September 1st, 2011
Ages: 4 & up
Source: unbound book from publisher to review
4 stars: I Enjoyed It
Purchase from: Amazon | Barnes & Noble

If you should ever get a rhinoceros for a pet, you're in for a surprise. It won't chase a ball. Or a stick. Or a frisbie. In fact, according to the experts, a rhinoceros does only two things: pop balloons and poke holes in kites.

But don't be discouraged. As you'll discover in Jon Agee's hilarious picture book, rhinoceroses can do more—so much more—than that! -quoted from Goodreads

A really cute story about a boy who chooses a pet, but this pet isn't quite what he had excepted. This rhinoceros surprisingly proves just how great of a pet he is! I never thought a rhinoceros would make a great pet, but after reading this hilarious story I can see just how useful this pet could be. This is a fun story with some great illustrations.
Posted by Mundie Kids at 10:09 AM Labels: 2011 A Year In Picture Books Reading Challenge, 4 stars, Book Review, Jon Agee, My Rhinoceros, Picture Book Month, Scholastic