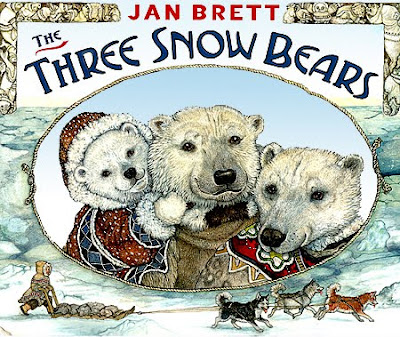 By: Jan Brett
Published by: Putnam & Sons, review edition (paperback edition) by Scholastic
Released on: September 13th, 2007
Source: Bought at Scholastic Book Fair
Ages: 3 & up
5 Stars: We Loved It
Purchase from: IndieBound | Amazon | Barnes & Noble
Aloo-ki glances up from fishing and sees her sled dogs floating off on an ice floe. She races after them and comes upon an igloo. Being a curious girl, she goes inside only to find no one home. That’s because the polar bear family who lives there is out walking while their breakfast cools off. Aloo-ki eats some soup, tries on their boots, and finally crawls into the smallest bed for a nap. Meanwhile, Papa, Mama, and Baby Bear see her dogs adrift, swim out to rescue them and return home to find Aloo-ki fast asleep in Baby Bear’s bed.

Jan traveled to the far North to meet the Inuit people and see the amazing land where they live. Dramatic illustrations capture the shimmering ice, snow and deep blue seas of the Arctic, and when Jan adds a raven-haired Inuit girl and her appealing huskies, an endearing family of polar bears, and playful Arctic animals in the borders, the result is one of her most beautiful picture books.

The decorative Inuit patterns and clothing Jan uses throughout are sure to attract adult fans and collectors while children will want to listen to and look at this exciting version of a well-loved story over and over again. -quoted from Goodreads

A wonderful re-telling of the children's classic, Goldilocks and the Three Bears, Jan Brett takes her readers to a beautiful Arctic world where a young Inuit stumbles upon the huge Igloo of three polar bears while looking for her dogsled team. Young Aloo-ki can't resist trying the warm soup, comfy boots and the warm beds of the three bears. The artwork in this story is beautiful! I love the way Jan paid respect to the culture and artwork of the Inuit culture. If you're a fan of Jan Brett's and story re-tellings, I highly recommend picking this book up.
Posted by Mundie Kids at 9:11 AM Labels: 2011 A Year In Picture Books Reading Challenge, 5 stars, Book Review, Jan Brett, Picture Book Month, Putnam Books, Scholastic, Scholastic Book Fairs, The Three Snow Bears