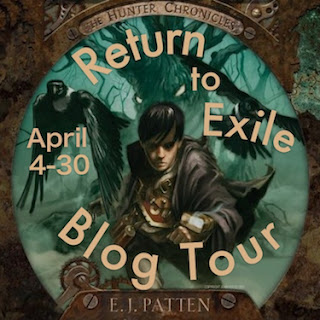 I'm thrilled to be the next stop in the Return to Exile blog tour. Today I have author E.J. Patten on the blog to talk about the first book in his The Hunter Chronicles series, Return to Exile. 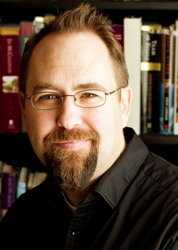 Which character did you enjoy writing the most?
It’s a toss up between “Random Policeman #1” and “He Who Must Not Be Named In This Story And Therefore Wasn’t.” I think I’m going to have to go with HWMNBNITSATW. It just has a nice ring to it. Rolls right off the tongue and onto the floor where the cat can nibble on it—assuming I had a cat, which I don’t.
Cats aside (seriously—put them aside; they’re filthy beasts with unwholesome licking habits), I really liked writing Phineas T. Pimiscule. The man wears a frock and a monocle; need I say more? Okay, I probably should say more.
I loved creating Phineas’s quirky personality and figuring out how to balance the quirks against his inherently dangerous nature. Phineas has lived for a long, long time. It’s hard to imagine living that long. In many ways, our goals are so short term—eat, survive school, fall in love, survive love, raise kids, fall on kids (maybe not the last one). But what would it be like if we’d done all those things over and over again, if we’d watched all our loved ones go through those same patterns and forget about us as the years rolled on? What would it be like to live that long, especially given Phineas’s tragic life? How long would it take before I grew tired of the world, what would push me over the edge, and what would make me want to stay? What would I cherish? What would I live for?
Phineas, and many of the Hunters of Legend (most of whom you’ll meet in later books) got stuck in time at some point. They grew tired of changing to keep up with the world. In many instances, their clothing marks the year they grew weary—Phineas’s frock, Malvidia’s black mourning dress, Morton Thresher’s bowler hat (you’ll meet him in The Hunter Chronicles, Book 2: The Legend Thief, which comes out in December).
Who is your favorite character in the book and why?
There are a lot of characters in Return to Exile and, to be honest, it’s hard to pick a favorite. Phineas is definitely at the top, but so are Sky, Crystal, Hands, and all the others. Not to mention the monsters. That’s why I’m going to say that I liked writing Phineas, but HWMNBNITSATW is my favorite.

*********
Thank you Eric for stopping by Mundie Kids today!
You can visit Eric via his Website | Twitter | Goodreads 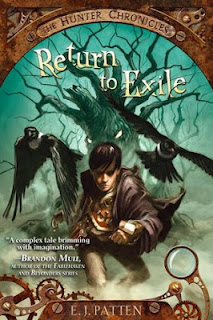 ONE BOY. UNTOLD ENEMIES. A WHOLE WORLD TO SAVE.
IT'S GOING TO BE A LOOONG THREE DAYS.

Eleven years ago, a shattered band of ancient monster hunters captured an unimaginable evil and Phineas T. Pimiscule rescued his nephew, Sky, from the wreckage of that great battle. For eleven years, Sky Weathers has studied traps, puzzles, science, and the secret lore of the Hunters of Legend believing it all a game. For eleven years, Sky and his family have hidden from dark enemies while, unbeknownst to Sky, his uncle Phineas sacrificed everything to protect them.

For eleven years, Sky Weathers has known nothing of that day.

But on the eve of Sky's twelfth birthday and his family's long-awaited return to the town of Exile, everything changes. Phineas has disappeared, and Sky finds himself forced to confront the mysterious secrets he's denied for so long: why did his family leave Exile on that day so long ago? What, exactly, has Phineas been preparing him for? And, the biggest mystery of all, who is Sky really and why does everyone want to kill him?!

Featuring an action-packed plot that covers the gamut of every monster you've never heard of (not to mention weird powers and weapons made out of garbage), Return to Exile--a modern-day fantasy adventure set in our world--is brimming with boy and girl appeal and is a gem for reluctant young readers. And, with a diverse assortment of well-aged monster hunters in the cast, this series will be a hit with adults young and old, as well -quoted from Goodreads