I'm thrilled to be apart of The Hero's Guide to Saving Your Kingdom blog tour today. 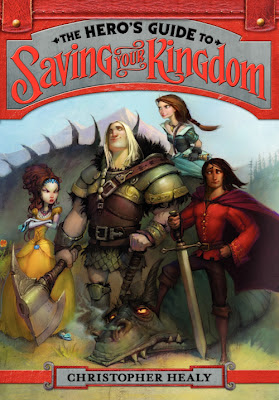 By: Christopher Healy
Published by: Walden Pond Press
Released on: May 1st, 2012
Source: ARC from publisher to review
Ages: 8 & up
5 Stars: I Loved It!
Purchase from: Amazon | Barnes & Noble

Enter a world where everything, even our classic fairy tales, is not at all what it seems.

This title is the first in a series about the adventures of Liam, Frederic, Duncan, and Gustav. The second title is due out in 2013 -quoted from Goodreads

I absolutely love a fresh spin on the beloved fairy tales I grew up with and Christopher Healy does just that with his debut, The Hero's Guide to Saving Your Kingdom. This fun mix up of fairy tale Princes and Princess is one that kids and parents a like with enjoy. There's adventure, plenty of mishaps and of course plenty of laughs as readers journey along side Prince Liam, Prince Frederic, Prince Duncan and Prince Gustav.

One of the many things I loved about this book is the humor. Christopher Healy's humor is one young readers will get and adult readers will love. I thoroughly enjoy a middle grade book that both my son and I can sit and read together, as well as get something out of it. This fairy tale mesh offers more than just humor and adventure, there's an important lesson in friendship that each of the Prince's as well as the readers learn.

Here's the thing I liked about each Prince, they all of these little quirks about them that they all learn to accept with each other as their story unfolds. They're not your average dashing Disney Prince, but these really fun, and some what relatable characters all end up learning to accept each other and themselves for who they are, which is a huge lesson for young readers to understand. In doing this each Prince learns to trust the others, which allows them to work together over the course of their adventures. There's a lot at stake for these Princes as they uncover the evil plot that could ultimately destroy each of their Kingdoms. Their team work is vital for them. I have to say, it's a lot of fun reading about how these charming Princes all learn to work together.

The Hero's Guide to Saving Your Kingdom is fun, highly entertaining, enchanting mesh up of the classic fairy tales. It's an engaging story that the entire family can enjoy. This is one of those outstanding MG books that I would HIGHLY RECOMMEND picking up and adding it to your bookshelves. You'll definitely see this book on my list of 2012 must have books at the end of this year.

Giveaway: Thank you to Walden Pond Press I have 1 copy of The Hero's Guide to Saving your Kingdom to giveaway! To enter, please leave me a comment telling which fairy tale Prince is your favorite, along with your email address. (US residents only). 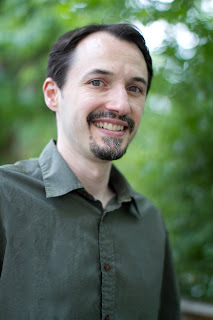 Chris Healy Bio: Christopher Healy spent years reviewing children’s books and media online and in print before setting off to write The Hero’s Guide to Saving Your Kingdom, his first children’s book. He lives with his wife and their two children in New Jersey. You can find him online at www.christopherhealy.com.