Book Review: The Unwanteds, Island of Silence by Lisa McMann 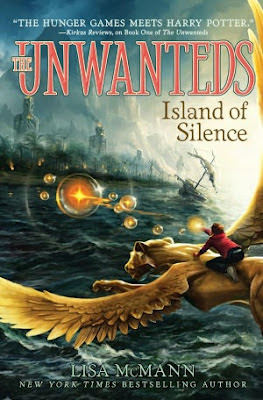 The battle is over. The magical barrier between the dreary land of Quill and the fantastical world of Artimé is gone. Now residents of both places are free to mingle, but tensions are high. The artistic warriors of Artimé struggle to forgive those in Quill who condemned them to death, while the Quillens attempt to recover from the shock of Artime’s existence, the loss of their leader, and the total collapse of their safe, orderly world.

14-year-old Alex Stowe has recovered from his physical wounds since his death-defying role in Artime’s victory, but his confidence is shattered. He battles self-doubt after Artimé’s beloved mage, Mr. Today, makes a stunning request, which is further complicated by the mysterious arrival of two silent, orange-eyed teenagers.

Meanwhile in Quill, Aaron is devastated by his fall from grace and seething with anger toward his twin brother Alex. Spurred by rage, Aaron recruits a team of Restorers and devises a masterful plan of revenge that will return him to power…if no one gets in his way.

Bestselling author Lisa McMann delivers another trademark page-turner in this second book of The Unwanteds series, as Alex and Aaron's parallel stories ultimately come together for a shocking climax that will leave readers desperate for more -quoted from Goodreads

What a fabulous sequel! Island of Silence picks up right where The Unwanteds left off and dives right into a plot line full of action, betrayal, chaos, and suspense. I swear Lisa McMann's writing gets better and better with each book. Every time I read her newest release it becomes my favorite Lisa book because of that. This time around I really liked how she not only told the story, but how she allowed me to understand the motives that drove the two brothers to make the choices they did.

It was really fascinating for me to see the brothers in a very different light than I had in The Unwanteds. I felt like I understood Alex a lot more in this book, and I got why Mr Today was so eager to teach him and train him in his ways. I also like the fatherly patience and wisdom that he gave to Alex. One of my favorite quotes from this book comes from Mr Today when he's talking to Alex:

"...... There will always be times we struggle, make bad decisions, even fail. What's important is not that we fail, but that we learn and grow. And that we know there is always someone out there who believes in us."

I liked seeing Alex's hesitation and admire him for stepping up to the plate to fulfill his duties when the time was right. It made him more relatable to be unsure of himself and then see him grow into this confident person. Alex is a hero who learns to overcome the little voice in his head that fills him with doubt. He learns to embrace his talents and he finds the confidence he needs to accomplish his mission.

Aaron on the other hand surprised me with all he does in this book. These two brothers reminded me of Yin and Yang. It seems with them you can't have the good without having the bad, and in some strange way the good and bad each brother sides with balances everything out. One brother's horrific actions leads another brother to his destiny. I know this sounds crazy, but when you read the book you'll see what I'm talking about. I liked how Lisa wove the two brother's paths together without the other knowing what his brother was really up to. I really wish I could talk specifics, but I can't without giving anything away. This story line seriously surprised me. I wasn't excepting some of the thing that happened to happen at all. It's so well written.

I enjoyed being able to dive back into the magical world of the Unwanteds. What I wasn't excepting was the incredibly fast paced story line, nonstop action, and surprising twists that Island of Silence has. I feel like I'm still catching my breath after finishing it. I can not wait to read the next installment in this incredibly addicting series. I highly recommend picking this up today!
Posted by Mundie Kids at 6:38 AM Labels: 5 stars, Aladdin, Book Review, Island of Silence, Lisa McMann, The Unwanteds