The Templeton Twins Have An Idea Blog Tour

I am so excited to be the next stop on The Templeton Twins blog tour! Today's stop features a guest post from author Ellis Wiener along with a giveaway!


The Templeton Twins Have an Analogue World

It was: that there would be no digital anything in the Twins’ world.  (There would also be no vampires.  Some readers will ask, “Not even one?”  Not even one.)

The digital miracles we all take for granted—computers, cell phones, dvds, video games, the Internet, etc., etc.—is great, epochal, fun, and so forth.  But it’s also essentially magical—in a boring way.  Digital devices make no noise, have no moving parts, and do their work inside black boxes we don’t want to—and couldn’t, if we did-open.  And if we did manage to open them, we would learn exactly nothing about how they work by observing them in operation.

So I resolved that the Professor’s inventions, and the difficulties the Twins would encounter, and their solution to these problems, would all be “analogue,” which is a fancy way of saying, physical.  There would telephones and electricity, but there would not be cell phones or any real presence of electronics.

This decision was not philosophical or political.  I love computers and am writing these very words on an already-obsolete Toshiba netbook that I, in my always-behind-the-curve appreciation, think is v. cool.

No, this decision was strictly authorial.  It is extremely difficult to have your protagonists get into scrapes and be forced to use their wits and resourcefulness, if they can whip out a cell phone (w/ GPS) and tell—or, worse, text to--their parent, guardian, bodyguards, or legal representatives where they are and what’s happening.

There is no reason for the Professor to invent a device that turns the pages of books via a compressed air foot pedal, if his reader is using a Kindle.  Of course, you can have the villain confiscate the phones, but not every time.

Better, then, to put the Twins in a world in which there are still pay phones, and even television, but no iPods or –Pads, no social networks, and no Twitter.

There is, of course, a well-established sub-culture dedicated to exactly this kind of thinking.  It’s called Steampunk, and its creations are gorgeous and amusing.  But I think it’s more an aesthetic style, and a nostalgic science fiction conceit, than an actual alternative to digital.  A steampunk computer keyboard may make use of the actual keys of an old Underwood, but the keys are still connected to electronics.

Not that I’m a maniac about “realism.”  I’m happy to invent analogue objects that probably—or definitely—could not exist.  But I want the Professor and the Twins to be bound by at least some visible, identifiable restrictions of cause and effect.  It’s more interesting for me, it’s more interesting (I assume) for the illustrator, it’s more challenging for the Twins, and I think (or at least hope) that it’s pleasing to the reader.

Besides, part of the fun about writing about the Twins is explaining how they figure things out, both physically and intellectually.  And you can’t do that with iPads and ultrabooks.  When everything is find-able on Google, nothing is a mystery.  And that’s no fun for anyone. 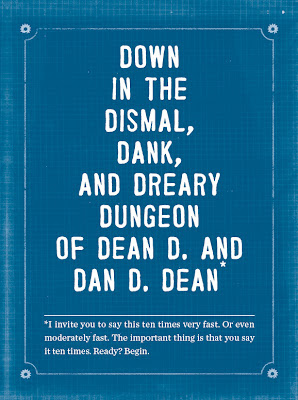 By: Ellis Wein
Illustrated by: Jeremy Holmes
Published by: Chronicle books
To Be Released on: 9/2012'
Ages 9-12
Suppose there were 12-year-old twins, a boy and girl named John and Abigail Templeton. Let’s say John was pragmatic and played the drums, and Abigail was theoretical and solved cryptic crosswords. Now suppose their father was a brilliant, if sometimes confused, inventor. And suppose that another set of twins—adults—named Dean D. Dean and Dan D. Dean, kidnapped the Templeton Twins and their ridiculous dog in order to get their father to turn over one of his genius (sort of inventions. Yes, I said kidnapped. Wouldn’t it be fun to read about that? Oh please. It would so. Luckily for you, this is just the first in a series perfect for boys and girls who are smart, clever, and funny (just like the twins), and enjoy reading adventurous stories (who doesn’t?!)
“An entertaining start to a new series.” - School Library Journal
“The scene-hogging narrator steals the show in this clever series opener.” - Kirkus Reviews
“Illustrations…play up  the story’s humor as well as highlighting the twins’ ingenuity.” - The Horn Book
“This book is for those students who enjoy a little sarcasm with their humor.” - Library Media Connection
- You can read an excerpt from the book here
- Follow the Twins on Tumblr

Ellis Weiner’s writing has been making kids and grown-ups laugh for more than 30 years. He skewered popular culture at Harvard Lampoon and Spy Magazine, and entertained the preschool set as a writer for such beloved TV shows as Bear in the Big Blue House, Reading Rainbow, and Eureka’s Castle. He is the author of several books, including Yiddish with Dick and Jane, and Arffirmations: Meditations for Your Dog. A frequent contributor to The Huffington Post and national magazines, his essay for the New Yorker, “Subject: Our Marketing Plan”  is a viral classic in the publishing industry. In addition to his busy writing schedule, he teaches humor writing at UCLA and performs frequently with his jazz band, The Status Seekers. He lives in Studio City, California.

The Giveaway:
I have a SIGNED copy of The Templeton Twins to giveaway to 1 lucky blog tour follower.
To enter, please LEAVE A COMMENT below telling me one of your goofiest, creative or just plan bright IDEAS you've had. Don't forget to include your email address.
- Open to residents of the US / Canada
- You must be 13 yrs & older to enter (under is required to have a parent/guardian's permission).