Horrid Henry and the Zombie Vampire by Francesca Simon 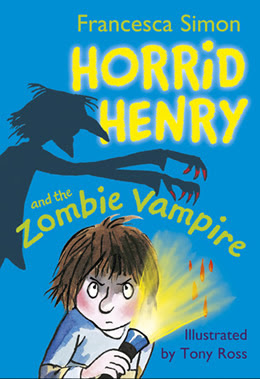 Henry is up to his usual mischief.


Four new stories in which Horrid Henry terrorizes his classmates at a school sleepover in the museum; plays with Perfect Peter and tricks him into handing over all his money; gets out of writing his own story for Miss Battle-Axe by adapting one of Peter's; and meets the Nudie Foodie, a celebrity chef, who comes to the school to improve school dinners. No more burgers! No more chips! - quoted from Goodreads

An entertaining read that will leave readers laughing out loud, Horrid Henry and the Zombie Vampires will definitely be a hit for fans of this series. With Francesca's easy to read text, some laugh out loud moments, and the book's smallish size make this a fast paced read even the most reluctant reader will enjoy. This book's 4 short stories will entertain just about anyone with a second grade reading level and higher.
Posted by Mundie Kids at 5:56 AM Labels: 3 stars, Book Review, Francesca Simon, Horrid Henry, Source Books, The Zombie Vampire, Tony Ross