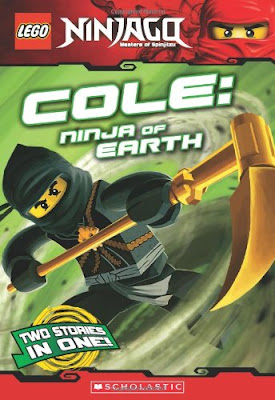 By: Greg Farshtey
Published by: Scholastic
Released on: January 1st, 2012
Ages: 7 & up
Pages: 80
Series: Ninjago Chapter Book Series
Source: book from publisher to review
5 stars: I HIGHLY Recommend It
Purchase from: Scholastic | Amazon | Barnes & Noble
Masters of Spinjitzu: a new force to save the world!
The next chapter book in the Ninjago series!Cole is the leader of the team. As the Earth Ninja, he is (perhaps unsurprisingly) the most grounded of the four. And the strongest. There is no physical challenge Cole cannot overcome. Now is his chance to use his skills to save the world! - quoted from Goodreads
I didn't think it was possible for my son to love a new lego series/sets as much as he loves Star Wars, but that was before Lego Ninjago. The thing I love about this new series of cartoons and books, is each episode and each book teaches young readers a lesson. Being the huge book fanatic I am, I LOVE that Scholastic has released a new line of Ninajago chapter books. These books aren't just a huge hit for my son, but for many of the boys in his 1st grade class.
The first Ninjago book we purchased was an item we couldn't keep in stock at the school's fall Scholastic Book Festival, the Ninjago Official Guide. Shortly after we purchased one of beginning reader Ninajo books, which was devoured shortly after we got home from the story, followed by the 1st & 2nd books in the new chapter book series. I love it when there's something that interests my kids and that interest is then turned into a book, which continues to fuel the reading fire for my kids. When this book along with Jay's story arrived the week of Christmas from Scholastic, my son immediately took them and went off to read. After I sat down to read Cole's story, I can see why.
Ninjago fans will thoroughly enjoy this new chapter book featuring the leader of the Ninjago team. Cole is a natural leader and in the first of the two stories included in this book we get to see his leadership put to the test. In the second story we see how the team struggles with each wanting to be the leader and what happens when they stop working together. Like all Ninjago stories, this one teaches a lesson on the importance of team work and how everyone who's apart of a team has something to add to the group that helps them accomplish their goal. In turn, readers will see that once the team is able to do this, they're able to fight the Phantom Ninja. Aside from my son's love of this book, I as a mother love the valuable lesson it also teaches him.
I HIGHLY RECOMMEND picking up this book, and this series. It's a must have for fans of the Lego Ninjago series and for readers who have advanced to reading chapter books.
Posted by Mundie Kids at 4:24 PM Labels: 5 stars, Book Review, Cole: Ninja of Earth (Lego Ninjago Chapter Book Series Books), Greg Farshtey, Lego Ninjago Chapter Book Series, Scholastic