Book Review: The Book of Wonders by Jasmine Richards 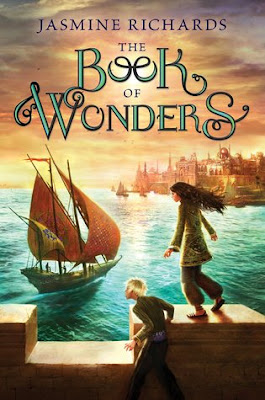 By: Jasmine Richards
Published by: Harper Collins Children's
Released on: January 17th, 2012 TODAY
Source: ARC from publisher to review
Ages: 10 & up
5 stars: I LOVED It!
Purchase from: Harper Collins Children's | Amazon | Barnes & Noble | IndieBound
Magic, Djinn, Ogres, and Sorcerers. Thirteen-year-old Zardi loves to hear stories about fantastical beings, long banned from the kingdom of Arribitha. But anyone caught whispering of their powers will feel the rage of the sultan—a terrifying usurper who, even with his eyes closed, can see all.
When her own beloved sister is captured by the evil ruler, Zardi knows that she must go to any lengths to rescue her. Along with her best friend, Ridhan—a silver-haired, violet-eyed boy of mysterious origins—and an unlikely crew of sailors led by the infamous Captain Sinbad, Zardi ventures forth into strange and wondrous territory with a seemingly impossible mission: to bring magic back to Arribitha and defeat the sultan once and for all -quoted from Goodreads
A fantastic debut that's full of adventure, fantasy, friendship and a whole lot of charm. I felt like a kid all over again while reading this compelling story. There's something about a well written middle grade book that reminds me of the excitement I had when I first started reading them (what feels like eons ago), and this book has that excitement. The journey with Zardi and her best friend Rhidan isn't just thrilling, it was completely engaging. The world of Arribitha screams of adventure, because it is dangerous, full of myths, magical creatures and a place where magic is strictly forbidden. It's also ruled by an evil and cunning Sultan who isn't afraid to do whatever it takes to keep his people in line. He definitely gives evil villains a who new meaning. Mixed into the story's danger are two well characters I've really come to admire.
I love that this story's main character is a strong female lead. Zardi will do everything she can to save her family from the Sultan, and thankfully she has her trusted best friend, Rhidan, who's equally as strong in his own right, to help her. These two have such an amazingly strong bond and will do anything to help each other on their journey and to fulfill Zardi's destiny. I loved being introduced to the two of them, as well as to some of the more vibrantly written secondary characters that aid them on their journey.
Jasmine's writing is beautiful, descriptive and it held my attention the entire time I spent reading The Book of Wonders. She made it extremely easy for me to picture her richly detailed world, and her characters in my mind. Their world is beautiful, enticing, magical and the story itself is fascinating. Jasmine does such a brilliant job at weaving together all the right elements to bring this adventure to life. Her lore is rich and inviting, her fresh spin on the mythology of Sinbad, and the tales of Aladdin and the Arabian Nights is intriguing. If this beautiful cover doesn't already lure you into the world of Arribitha, than the story definitely will. I highly recommend picking up this exciting fantasy/adventure story! I'm looking forward to reading the next installment in this series.
Check out the book trailer here:
Follow Jasmine on Facebook | Blog | Twitter
Posted by Mundie Kids at 12:57 PM Labels: 2012 Debut Author Challenge, 5 stars, Book Review, Harper Collins Childrens, Jasmine Richards, The Book of Wonders