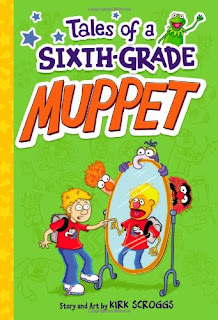 By: Kirk Scroggs
Published by: Little Brown kids
Released on: September 5th, 2011
Source: book from the publisher to review
Ages: 8 & up
4 stars: I Enjoyed It
Purchase from: Amazon | Barnes & Noble
On a scale of one to ten, sixth-grader Danvers Blickensderfer's life is a solid minus two. But he really hits rock bottom when he auditions for the local talent show: his death-defying hula-hooping-ninja tribute to Gonzo the Great is beat out by the world's most obnoxious middle school boy band, Emo Shun.
With his daredevil dreams dashed, Danvers goes to bed... and wakes up feeling a little fuzzy-literally! He's turned into a Muppet! Fortunately, there's an internship open at the Muppet Theater and Danvers has a chance to meet his long-nosed, stunt-lovin' hero! All aboard The Electric Mayhem bus as this misfit makes good and joins the zaniest crew ever: The Muppets! -quoted from Goodreads
Growing up a Muppets fans, I adored this book and it's one my son enjoyed just as much as I did. Scroggs does a great job at staying true to the humor and misadventures that the Muppets are known for. I thought it was really creative in the way the story is told, which is through a kid name Danvers who wakes up one morning to find himself now a Muppet. Not only do readers get a behind the scenes glance of all that goes in the Muppet's world, but it was really cool to see how a huge fan of the Muppet's himself tries to adjust being one now.
The story is told in an engaging way with plenty of humor, mixed in with illustrations and words that were a bit similar to the way Diary of a Wimpy Kid is written. I think this style of story telling is great for reluctant readers or kids who easily get bored with a bunch of text. Within the illustrations are some hilarious jokes and mis adventures that happen with the Muppets. I loved that a lot of my favorite Muppets are featured in this story, as well as some new ones that fit in perfectly with Danvers. Scroggs does a fabulous job at introducing a new generation to all of the Muppets from the original show with Kermit, Miss Piggy, Scooter, Gonzo, Animal and the Electric Mayham Band, Beaker and Dr. Bunson Honeydew (who try to unsuccessfully return Danvers back to being a human), Sam the Eagle, Rowlf, and Fozzie. This story wouldn't be complete the famous duo of Statler, Waldorf who are of course constantly poking fun at everything that goes on and start heckling Danvers from the moment he becomes a Muppet.
This story is written in a way I'd except a Muppets book to be written. There's plenty of laugh out loud moments, jokes and puns that both tween readers as well as their parents will get a good laugh at. If you ever wondered what it would be like to be apart of The Muppets world, you'll know after reading Danver's story. I liked that Scroggs was able to create a story that takes place in both The Muppet and Danver's world and combines the two of them. It definitely makes for an interesting read. There's a few things that weren't tied up at the end that leaves me wondering if they'll be a sequel. Even if there's not, this is still a book I'd recommend picking up. I enjoyed the story line, the world Danver's is now a part of and the illustrations are fabulous.
Posted by Mundie Moms at 5:56 AM Labels: 4 stars, Book Review, Kirk Scroggs, Little Brown Kids, Tales of a Sixth Grade Muppet