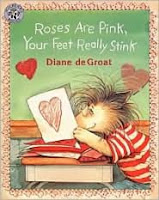 Written and Illustrated by: Diane deGroat
Publisher: Harper Collins (browse inside the book)
Release Date: December 10, 2010
Source: Purchased
Ages: 5-7 years
Purchase from: IndieBound| Barnes and Noble﻿
Synopsis: When Gilbert writes two not-so-nice valentines to his classmates, his prank quickly turns into pandemonium. But there's always time for a change of heart on Valentine's Day.
When Gilbert forges other students' names on some mean valentines, his trick is soon discovered and his classmates are angry.
Oh, the pain of writing out Valentine's Day cards. I just went through this with my youngest two kids. This story illustrates how tricky it can be to personalize the sentiment inside cards. Should you be mean to those who were not nice to you? Should you sign someone else's name to them? Well, Gilbert does both and the pain of watching your classmates get mad at each other wears on him. Also, the fact that people eventually figure out who wrote the "bad" cards is a valuable lesson.
As I tell my children, lies have short legs. Gilbert discovers just this as the kids who were mean to him (and he wrote the bad poems to) are sorry and he realizes that treating people the way you want to be treated is the best way to keep peace.
Posted by Sophie at 1:18 PM Labels: Book Review, Harper Collins, Roses are Pink Your Feet Really Stink