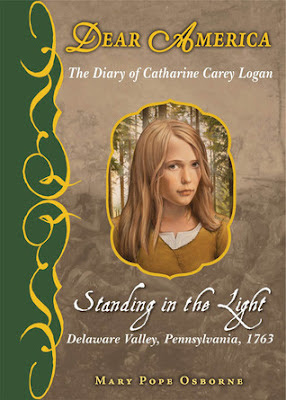 By: Mary Pope Osborne
Published by: Scholastic
Released on: May 1st, 2011 (this edition)
Source: book from publisher to review
Ages: 10 & up
5 stars: I Loved It
Purchase from: Amazon | Barnes & Noble
Series: Dear America Series
A Quaker girl's diary reflects her experiences growing up in the Delaware River Valley of Pennsylvania and her capture by Lenape Indians in 1763. -quoted from Goodreads
I absolutely love this series, and this particular story is by far my favorite out of all the ones I've read so far. Mary Pope Osborne has done such a beautiful job at bringing to life what living in Delaware Valley, PA in 1763 was like, as well as capturing the emotions that young Catharine felt during this time. Mary paints a beautiful and yet heartbreaking picture of both sides of the Quaker settlements, and the settlements of the Native Americans, and the friendships and wars the consumed both sides. This beautifully told story follows that of young Catharine who was a young teenage girl during time and wrote about life on her family's settlement, and the frightening accounts of the attacks by the local Indians on them as well as the small band of local residents who attacked the Indians in her journal. It's also a story about the bravery, courage and love Catharine developed during her captive time with the local Lenape Tribe that captured her, and her brother.
I loved the way Mary was able to allow me to see both sides to this story. I grew to really admire Catharine and I felt like I was able to understand her fears, her desires and later why she loved the people who kidnapped her, took good care of her, and captured her heart. I felt like Mary's writing provided me a way of looking back on brief moment in our country's history. She not only told Catharine's story in a manner that felt like I was reading a real journey, but she educates readers on the history of what happened between the settlements and the local Indian tribes. That part of the story is fascinating and completely heartbreaking. I've always felt saddened over the way the lands were taken from the local tribes, but with that heartbreak I also love reading about the accounts of the friendships that happened between different tribes and settlements.
I've always been drawn to this time period and I felt like Catharine's story only fueled my love and fascination for it. Mary Pope Osborne does a beautiful job with this story as she not only allows the reader to feel the fears Catharine's has over the local Native American tribes, but she turns the tables and allows the readers to feel and understand the love that Catharine slowly develops for the Lenape Tribe during her time with them. I admire Catharine and her brother Thomas in learning about the things they do as adults in the Epilogue to help fight for the freedoms of all people, Native Americans, slaves and so forth. I highly recommend picking up this book, and this entire series. They're moving, educational and so well written that tweens, teens and adults will love feeling like they're being taken back in time while reading each book.
Teachers can find the discussion guide for this book here.
Posted by Mundie Moms at 10:44 AM Labels: 5 stars, Book Review, Dear America Series, Scholastic, Standing in the Light, The Diary of Catharine Carey Logan