Waiting On Wednesday: The Unseen Guest (The Incorrigible Children of Ashton Place #3) 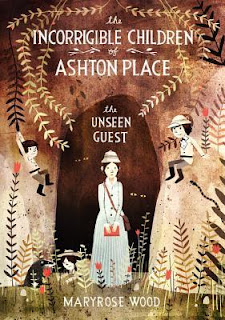 By: Maryrose Wood
Published by: Harper Collins Children
To Be Released on: March 27th, 2012
Series: Book #3 in The Incorrigible Children of Ashton Place


Of especially naughty children it is sometimes said, "They must have been raised by wolves."
The Incorrigible children actually were.

Thanks to the efforts of Miss Penelope Lumley, their plucky governess, Alexander, Beowulf, and Cassiopeia are much more like children than wolf pups now. They are accustomed to wearing clothes. They hardly ever howl at the moon. And for the most part, they resist the urge to chase squirrels up trees.
Despite Penelope's civilizing influence, the Incorrigibles still managed to ruin Lady Constance's Christmas ball, nearly destroying the grand house. So while Ashton Place is being restored, Penelope, the Ashtons, and the children take up residence in London. Penelope is thrilled, as London offers so many opportunities to further the education of her unique students. But the city presents challenges, too, in the form of the palace guards' bearskin hats, which drive the children wild--not to mention the abundance of pigeons the Incorrigibles love to hunt. As they explore London, however, they discover more about themselves as clues about the children's--and Penelope's--mysterious past crop up in the most unexpected ways. . . .
I absolutely LOVE this series and I can not wait for this book to be out next week so I can run out and pick it up. This is a fabulous MG series with a blend of historical fiction, adventure and lots of fun. What book MG or children's book are you waiting on?
Posted by Mundie Kids at 8:32 AM Labels: Harper Collins Childrens, Maryrose Wood, The Incorrigible Children of Ashton Place, The Unseen Guest, Waiting On Wednesday