Book Review: Eye of the Storm by Kate Messner 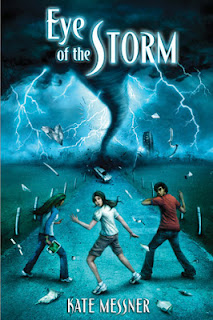 By: Kate Messner
Published by: Bloomsbury Kids
Released on: March 13th, 2012
Source: book from author / publisher
Ages: 10 & up
4 stars: I Enjoyed It
Purchase from: Amazon | Barnes & Noble | IndieBound
In the not-too-distant future, huge tornadoes and monster storms are a part of everyday life. Sent to spend the summer in the heart of storm country with her father in the special StormSafe community his company has developed, Jaden Meggs is excited to reconnect with her dad after he spent years researching storm technology in Russia. She’ll also be attending the exclusive summer science camp, Eye On Tomorrow, that her dad founded. There, Jaden meets Alex, a boy whose passion for science matches hers, and together they discover a horrible truth about her dad’s research that is putting countless lives at risk. As a massive tornado approaches, threatening to destroy everything in its path, Jaden is torn between loyalty to her dad and revealing his secret. Can she find the courage to confront her dad and save everyone from the biggest storm yet? -quoted from Goodreads
With it's blend of science, intelligent kids, mystery and set in a dystopian world, Eye of the Storm makes for an exciting read for both older middle grade readers and older fans of MG books. Kate Messner does a fabulous job at creating a not so distant feature were the characters not only genetically engineer their food, but they control the weather and live in communities that are safe havens for the increasingly strong storms, unlike what we see in our day. Kate's blend of science with her dystopian world make for an incredibly intriguing setting and story. I really enjoy the way Kate was able to explain the meteorology & scientific part of her story line so that someone like myself was able to understand what was going on and what Jaden was both working on and working to uncover.
Jaden is a fun character to get to know. When the story starts she's sent to spend some time with her workaholic father in the storm safe community of StormSafe. Not only did her father create this place, but it's a place that protects the select people who live there from the monstrous storms that now plague every day life.  While there, she's also going to be attending the elite science camp, Eye on Tomorrow, a camp her father also founded, to learn how to control and stop these monstrous storms. Jaden isn't just an intelligent kid, she's fun, she thinks things out, is a loyal friend, and is a heroine. During Jaden's time with her father and time at camp she starts to uncover some startling discoveries with her father's company. I really admired Jaden's desire to find the truth and help save those who are in the path of a seriously deadly storm.
Aside from the characters and the setting, I really liked the scientific part of this story. While reading it, it felt believable. What if we could control the weather? What if we could build communities that were safe havens from deadly storms? I was fascinated with what Kate came up with and her ability to help me understand the scientific part of the storms that Jaden's father was working with and what Jaden and her friend Alex were also working on. I can only imagine all the time Kate put into researching storms, and the science behind them for her story. This is definitely an exciting read with a few intense scenes with a few storms that hit close to home. Eye of the Storm is a book I'd definitely recommend to fans of dystopians, science and well written, engaging MG book.
** Teachers- don't miss Kate's discussion & teaching guide for Eye of the Storm here.
*** Be sure to check stop by the blog on Monday to enter to win a copy of Eye of the Storm!
Posted by Mundie Moms at 8:45 AM Labels: 4 stars, Bloomsbury Kids, Book Review, Eye of the Storm, Kate Messner, Middle Grade March Madness