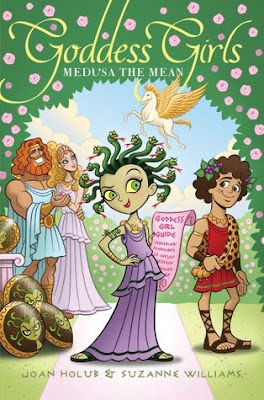 By: Joan Holub & Suzanne Williams
Published by: Aladdin
Released on: April 3rd, 2012 TODAY
Source: book from author/publisher to review for blog tour
Ages: 8 & up
4.5 stars: I Really Enjoyed It!
Purchase from: Aladdin | Barnes & Noble
Series: Book #8 in the Goddess Girls series
Medusa is the ultimate mean girl in this series that blends modern drama with ancient myths.Well researched and true to the original myths, each volume in the Goddess Girls series addresses contemporary issues, like friendships and relationships, from a classically accurate—and entertaining—perspective.

In Medusa the Mean, Medusa is sick and tired of being the only mortal at Mount Olympus Academy. Not only is she surrounded by beautiful, powerful, immortal classmates, but she also has snakes for hair and a reputation for being mean. Immortality, she thinks, will solve everything. So when she finds out about a necklace that promises just that, she’s sure it will help her get the two things she covets most: to be as popular as the four Goddess Girls and to have her supercrush, Poseidon, finally notice her. But when the necklace brings about popularity in the totally wrong way, things go from bad to worse. Can Medusa overcome her “meanie” status and prove that there’s more to her that meets the eye? -quoted from Goodreads
I absolutely love this series! Joan and Suzanne have done such a wonderful job at creating relatable young Greek Goddesses and Gods that MG and older elementary grade readers will enjoy reading. One of the things I love about this series is how each young Goddess has her own book. This not only allows readers to get to know each one more, but they also see how she interacts with the previous Goddess Girls already introduced into the series. With this story, I enjoyed getting to know more about Medusa.

Medusa the Mean wasn't always mean. I mean, yes she does do something things that aren't always nice, but there's more to her than her looks and a head full of snakes. Medusa is a fun character to get to know. I like that she's a strong willed girl, who through out the course of this story learns some very important lessons. She learns to never give up on your her dreams no matter how impossible they seem. She also learns a harsh lesson in first crushes, heart ache and finding someone who likes her for who she is. I love that she's a girl who learned to stand up for herself and embrace who she is. She realizes she doesn't need to be anyone put herself. Once you're through reading this book, you'll realize there's more to Mean Medusa than being mean.

Medusa the Mean is a fantastic addition to the Goddess Girls series! I love that like the rest of the books in this series, each girl's story carries a powerful message in it for younger girls and readers to connect with. This series is also a great fit for young readers who want to get to know more about Greek mythology. Honestly, I wish I had this series around when I was younger. I'm far from being deemed a young reader anymore, and I love this series. I'm hoping this is one series my daughter will want to read when she's a little older. I highly recommend picking this book up TODAY!