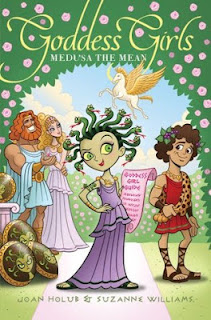 Congratulations on your newest release, Medusa The Mean! What's one of things you've come to admire about young Medusa?
We admire her spirit. Nobody keeps her down. She wasn’t invited to Mount Olympus Academy—she had to trick her way in. Her mom is a sea monster and her dad’s a sea hog. They favor Medusa’s sisters over her and let her know it. But Medusa is determined to be successful, despite her parents lack of faith in her.
I adore The Goddess Girls Series. Who's been one of your favorite characters to write about?
We’re so glad you do, Katie! As for our favorite characters, it’s hard to choose! We’re glad the series has run long enough that we could write about Medusa because she’s one of the most intriguing and well-known figures in Greek mythology. Yet she’s mortal at a school where most students are immortal and have magical powers of some kind. Even her own sisters are immortal. No fair! Medusa’s not the type to give up when she wants something. So it’s immortality or bust!
How would you describe young Medusa in 5 words or less?
Snake-haired, green, untrusting, determined, mortal.
Are you currently working on another book for this series? If so, are you able to tell us a little bit about it?
Sure, Katie. Next up is our first Goddess Girls Super Special: The Girl Games. The cover has shiny foil! We wanted to celebrate all four of the main goddessgirls in this one, so we wrote from all four points of view in alternating chapters.
To follow are Pandora the Curious and Pheme the Gossip, which are both in progress.
If you were a student at Mount Olympus Academy, whom would you most likely be friends with Athena, Aphrodite, Persephone, Artemis or Medusa?
Joan: Athena. She’s brainy and a good friend. Or Medusa, if she’d let me in. I think she’s got a humorous side and could be a good friend if she learned to trust me. Aphrodite cracks me up. I like that she’s beautiful and knows it, yet she doesn’t think she’s better than anyone else because of it.
Suzanne: Athena maybe. I was a school librarian for many years and admire her devotion to reading. It would be nice to have Persephone as a friend because she’s so kind and is always trying to smooth things over. I wish I were as brave and loyal as Artemis!
Joan: Ha! I think we’ve covered everyone between us, Suzanne. Must be why we’re a good writing team—we complement each other.
In creating a popular series for MG readers, do you find it gets easier or harder to write each story?
There’s an endless amount of material in Greek mythology to draw upon. So the initial idea for a book usually comes easily. It’s the next step--the synopsis—that’s usually hard for us. The way we start a book is on the phone. We brainstorm basic plot ideas, themes, character interactions, possibilities for humor, etc. Then one of us writes a 15-20 page synopsis for the book. The finished synopsis gets handed off to the other person, who makes many suggestions and changes. The person who wrote the synopsis then writes a first draft of the book. Once that’s finished, it goes to the other person to revise. We completely overhaul each other’s drafts, trading them back and forth numerous times. This way, the writing becomes such a blend of our ideas and styles that it sounds like one author writes all the books.
What advice would you give to aspiring young writers?
I’d say be sure to choose your basic story idea wisely. If your overall idea is weak, it will be harder to find your way. Find a writing partner you trust so you can get honest feedback on your ideas and stories. Read to learn pacing and plotting structure.
We met at a meeting of an organization for writers and illustrators called scbwi.org. It offers regional and national conferences, and other resources for aspiring and published authors.
Be yourself when you write, not what you think an author should be. Relax. Have fun!
*******
Thank you to Joan and Suzanne for stopping by and visiting with us today! Please be sure to pick up Medusa the Mean (April 3rd)
Medusa is the ultimate mean girl in this series that blends modern drama with ancient myths.Well researched and true to the original myths, each volume in the Goddess Girls series addresses contemporary issues, like friendships and relationships, from a classically accurate—and entertaining—perspective.
In Medusa the Mean, Medusa is sick and tired of being the only mortal at Mount Olympus Academy. Not only is she surrounded by beautiful, powerful, immortal classmates, but she also has snakes for hair and a reputation for being mean. Immortality, she thinks, will solve everything. So when she finds out about a necklace that promises just that, she’s sure it will help her get the two things she covets most: to be as popular as the four Goddess Girls and to have her supercrush, Poseidon, finally notice her. But when the necklace brings about popularity in the totally wrong way, things go from bad to worse. Can Medusa overcome her “meanie” status and prove that there’s more to her that meets the eye? -quoted from Goodreads
If you haven't already, I highly recommend picking up The Goddess Girls series by Joan Holub and Suzanne Williams. This series takes place at Mount Olympus Academy, and puts a modern spin on classic Greek myths. Aladdin paperbacks ages 8 ~ 12.
********
Thank you to Joan and Suzanne I've got a fabulous giveaway, a SIGNED copy of Medusa The Mean. To enter, please fill out the forum below (standard giveaway rules apply), open to residents of the US.
Posted by Mundie Kids at 1:27 PM Labels: Aladdin, Joan Holub, Medusa The Mean, Medusa The Mean Blog Tour, Mundie Kids Author Interview, Mundie Kids Giveaway, Suzanne Williams