Trenton Lee Stewart's The Extraordinary Education of Nicholas Benedict went on sale yesterday! Trenton himself is headed out on tour! You have your chance to meet him and get your book signed at the following locations: 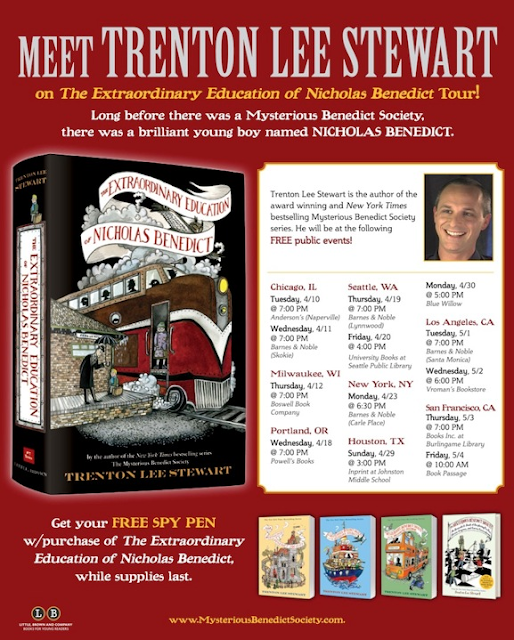 Be sure to stop by Little Brown's site for the Mysterious Benedict Society, which includes a fantastic book trailer for The Extraordinary Education of Nicholas Benedict.


"The Mysterious Benedict Society series has received a combined five starred reviews, and has sold over 1.5 million copies. But long before the adventures of The Mysterious Benedict Society series’ foursome - Reynie, Kate, Sticky and Constance - there was a brilliant young boy named Nicholas Benedict with his own problems, his own unusual friends, and his own mystery to solve. This is his story!"
To celebrate the release of Trenton's newest books, Little Brown is giving away 3 copies of this book!! Exciting right!?! To enter, all you need to do is fill out the form below. Standard giveaway rules apply. US only & no PO Boxes. Must be 13 yrs & older to enter, or have a parent/guardian's permission.