I recently posted my review for Jenny's debut book on Mundie Moms, but I also wanted to feature it here on Mundie Kids, as it's a fun MG read with a great message for kids. 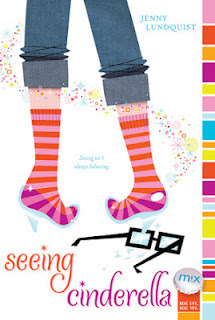 By: Jenny Lundquist
Published by: Aladdin
Released on: March 20, 2012
Source: book from publisher to review
Ages: 9-13
4 Stars: I Enjoyed It
Purchase from: Amazon | Barnes & Noble
Calliope Meadow Anderson wishes her life could be more of a fairy tale—just like the stories she writes. Her best friend, Ellen, is acting weird, her parent's marriage is falling apart, and to top things off, she found out she needs hideously large and geeky glasses.

But Callie soon learns they aren't just any glasses—they are magical and let her read people's thoughts. For the first time ever she's answering all the questions right in math class, and gets a glimpse of what goes through people's minds all day, including what Ellen—and her longtime crush—really think of her.
As if dealing with these crazy glasses weren't enough, Callie tries out for the lead in her school's production of Cinderella and actually gets the part. Instead, Callie chooses to let Ellen have the lead and be Ellen's understudy—just like she has done for their entire friendship. Add in a new girl who has something to hide, a secret admirer, a best friend stealer who isn't what she seems, and Callie's year just went from ordinary to extraordinary.
Can this supporting actress learn to be a leading lady in her own life? Or is she destined to stay in the background forever—even with her super-freaky-magic glasses? -quoted from Goodreads
I love it when a book is not only written in a way that readers of all ages will be able to identify with it, but it delivers a great message for it's targeted audience. Jenny Lundquist's debut, Seeing Cinderella is a fun, charming, fast paced read that really struck a chord with me. Though I was never shy like the story's main character Callie, I still got her as a character. I remembered what it was like to be in her shoes at that awkward age in middle school when you're trying to discover who you are, you deal with first crush, you first heart break, you realize there's someone better out there, losing best friends, being made fun of, and making new friends. This line at the beginning of the book really hit home for me,
"I see Ellen making a bunch of friends at middle school. Then I see me' - I pointed to the larger stone- "reading a book or writing a story in my journal."
"Do you find that easier than making new friends?" Dr. Ingram asked.
"Books and journals can't make fun of you or call you names."
Like Callie, at some point you try to realize that there's much more than meets the eye going on around you with your fellow classmates and friends. You realize that it's more than just okay to be who you really are. Callie has a bit of an upper hand in discovering everything that's going on around her. Like Callie, I remember vividly the horror of having to get those big ole' chunky glasses in middle school and how embarrassing it was to have to wear them. Much like Callie's, mine were for reading, but unlike hers, mine didn't allow me to read everyone's thoughts. While that might seem cool at first, after reading Callie's story there's no way I'd want to know what people are thinking, especially in middle school. Anytime Callie has her glasses on she's able to read her friends, teachers and parent's minds. I liked that Callie figures out that her glass it make it extremely easy for her to misinterpret what others are thinking, and there's more going around her than her own problems.
For me what made Callie such a great character is how relatable she is. I enjoyed getting to know her and seeing her change to the girl she becomes by the end of her story. Seeing Cinderella isn't a fairy tale retelling, but it has a lot of fairytale type qualities to it. Jenny's writing is clean cut, encouraging, and the messages she includes through out her story are ones that readers of all ages can take to heart. Aside from Callie, I really liked her Optometrist, who spoke more like a fairy godmother than an eye doctor. He not only teaches Callie a great lesson by lending her the "special" glasses, but he teaches readers something as well. When we first meet him he tells Callie his glasses, "help me see who merely needs eyewear and who requires vision correction." He reminds Callie, "You never know what you'll see when your vision is corrected."
This is one of those books that speaks a lot both with it's words and will have you reading between the lines to pick up on more of what Jenny is really getting across. Seeing Cinderella is a story I really enjoyed, and I'm looking forward to reading more books by Jenny. If you're looking for a wonderful story to spend the afternoon with, I highly recommend picking this one up!
Posted by Mundie Kids at 11:39 AM Labels: 2012 Debut Author Challenge, 4 stars, Aladdin, Book Review, Jenny Lundquist, Seeing Cinderella