Waiting on Wednesday: Merits of Mischief, The Bad Apple by T.R. Burns 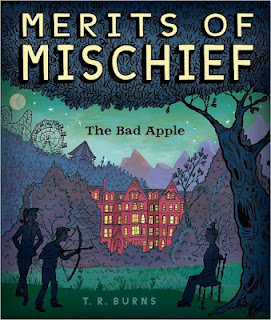 Quirky and irreverent new middle-grade series about a group of kids being trained to cause trouble!

For all of his 12 years, Seamus Hinkle has stayed out of trouble, but on one fateful afternoon in the Cloudview Middle School cafeteria, Seamus accidentally does the unthinkable—a substitute teacher is dead, and Seamus is to blame.


Unable to return to Cloudview, Seamus’ parents take him to the most infamous of reform schools: Kilter Academy. But when Seamus’ parents drive off, headmistress Annika Kilter shows her true colors: she’s not interested in reforming delinquents, but quite the opposite—the mission of Kilter Academy is to foster troublemaking, and she's decided Seamus is her star pupil!


Together with his new mischief-making friends, Seamus lives every young boy’s dream of getting points for getting in trouble! But soon Seamus discovers that Kilter Academy may have more plans in store for its students than just turning out troublemakers…

T.R. Burns is an acclaimed author of several middle-grade and YA novels for girls, and she’s gone undercover (under her initials) to present this fantastic new series! -quoted from Goodreads

Doesn't this sound like a fun MG read? I can't wait to read it!
Posted by Mundie Moms at 9:08 PM Labels: Merits of Mischief, Simon and Schuster Kids, T.R. Burns, The Bad Apple, Waiting On Wednesday