Book Review: Martin on the Moon by Martine Audet 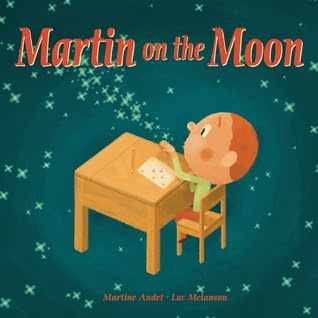 An active daydreamer, Martin can't help his mind from wandering on the first day of school. His teacher's waving arms remind him of the seagulls that fly along the river banks, which reminds him of a summer trip he took with his mother, which reminds him of a poem he wrote, which reminds him...
When his teacher gently calls him back to Earth, Martin is embarrassed about his inattention. But when his whole class laughs along with him, Martin happily realizes that his imagination can help him make friends and have fun at school.
The spirit of this whimsical story comes alive through the pairing of inquisitive and unexpected words and simple yet surreal illustrations. Nominated for the Prix TD de littérature canadienne pour l'enfance et la jeunesse in its original French, Martin on the Moon explores the poetry, beauty, and possibility of the first day of school. -quoted from Goodreads
What a fun read! This story is about a boy named Martin who day dreams. It's Martin's first day at school and he can't help but pretend he's somewhere else. You see, Martin's day dreams are used as a way to help him cope with being in a new class room, surrounded by some unfamiliar faces. To help ease his fears, he pretends he's on the moon. By doing this, Martin is able to mentally talk himself through his worries and fears. Along with Martin himself, I liked the way this story is told and the simply, yet engaging choice of words, and the tone of the story itself.

It's not very often you can pick up a picture that portrays real fears that younger kids deal with, on a level they'll get. Martin on the Moon is a book that tackles that perfectly, and makes it easy for kids to understand what Martin is doing and why. Huge kudos to the illustrator, Luc for being able to not only capture Martin, he does a great job at showing us Martin in the present and Martin in his day dream. Luc makes it incredibly easy for younger readers to understand what's going on. I also liked that fact that the story illustrates Martin's teacher as a kind teacher who seems to understand what's he going through and what he's doing with out having to ask him nor does she point it out in front of everyone else. In stead she asks him what he's doing and gives him that assuring "I know what you're doing" smile.

I enjoyed this book. It's a good read, with a good story line, great illustrations and a catchy color scheme kids will love.
Posted by Mundie Moms at 5:53 AM Labels: 3.5 stars, Book Review, Luc Melanson, Martin on the Moon, Martine Audet, Owlkids Books