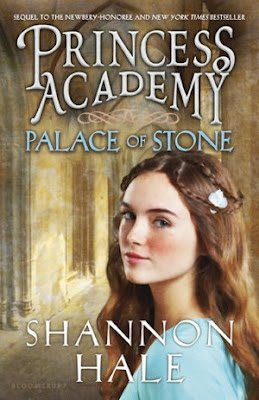 By: Shannon Hale
Published by: Bloomsbury Children's Books
To Be Released on: August 21st, 2012
Pre-Order from: Amazon | Barnes & Noble

Coming down from the mountain to a new life in the city seems a thrill beyond imagining. When Miri and her friends from Mount Eskel set off to help the future princess Britta prepare for her royal wedding, she is happy about her chance to attend school in the capital city. There, Miri befriends students who seem so sophisticated and exciting . . . until she learns that they have some frightening plans. They think that Miri will help them, that she should help them. Soon Miri finds herself torn between loyalty to the princess and her new friends’ ideas, between an old love and a new crush, and between her small mountain home and the bustling city.

Picking up where Princess Academy left off, this incredible stand-alone story celebrates the joys of friendship, the delight of romance, and the fate of a beloved fairy tale kingdom -quoted from Goodreads

I love Shannon Hale's books and I'm so excited about this sequel! If you haven't already, I highly recommend picking up her books. They are fabulous. I'm looking forward to sharing my review for this book in the coming weeks here on the blog.
Posted by Mundie Moms at 6:57 AM Labels: Bloomsbury Children's Publishing, Palace of Stone, Princess Academy, Shannon Hale, Waiting On Wednesday