Book Review: Ghosts in the Fog, The Untold Story of Alaska's WWII Invasion by Samantha Seiple 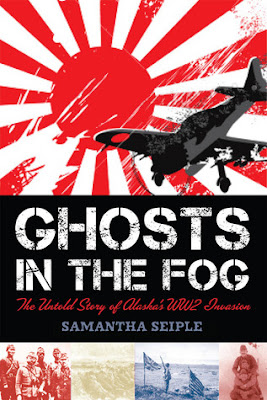 By: Samantha Seiple
Published by: Scholastic
Released on: October 1st, 2011
Source: book to review from Scholastic
Ages: 10 & up
4 stars: I Enjoyed It
Purchase from: Amazon

Few know the story of the Japanese invasion of Alaska during World War II--until now.

GHOSTS IN THE FOG is the first narrative nonfiction book for young adults to tell the riveting story of how the Japanese invaded and occupied the Aleutian Islands in Alaska during World War II. This fascinating little-known piece of American history is told from the point of view of the American civilians who were captured and taken prisoner, along with the American and Japanese soldiers who fought in one of the bloodiest battles of hand-to-hand combat during the war. Complete with more than 80 photographs throughout and first person accounts of this extraordinary event, GHOSTS IN THE FOG is sure to become a must-read for anyone interested in World War II and a perfect tie-in for the 70th anniversary of the bombing of Pearl Harbor -quoted from Goodreads

Having a grandfather who was a POW of WWII, I grew up with hearing a lot of stories about the war, and that fueled my desire to learn more about the war the older I got. I was really quite shocked when I sat down to read this book, as I hadn't heard anything about Japan's invasion in Alaska during June of 1942 through August of 1943. Quite honestly it made me angry to learn that this invasion could have been voided, and also was covered up by our own country. I thought Samantha Seiple's account of the invasion, and what happened before, during and after this time was well done. I felt she did a great job showing all sides of this story not only from personal accounts, but all recorded accounts as well.

War is not pretty, and often times the enemy is viewed as this horrid monster, but what I found fascinating from some of Seiple's personal accounts that were used in the story is some of the guys on both sides of this war knew each other, and went to school together. Even more surprising is that two of the men who fought against each other ended up becoming friends after the war. While this invasion took lives, and virtually wiped out villages, there were people who arose about the horrible circumstances they were placed in and forgave those who did them wrong. Not only that, Seiple humanized those who fought for Japan, and allowed me to realize that just like some of those who fought for the US, there were man who were forced to fight for Japan, that did not believe in the war.

Those that survived during this time were resilient, courageous American men, and women who did what they had to do to live. I am shocked over what some of them had to endure, not just as the hands of the Japanese, but the brutal elements as well. The heart of this story is of course those Americans who one, didn't know what was happening when the Japanese invaded their islands on the days of June 3rd- 6th, and who virtually had no help from the outside, since the government at that time didn't want the word to get out that Japan had in fact invaded the US. The accounts of those who survived this ordeal are amazing. Their will to survive and sacrifices to save their families, their home and country are amazing.

Sadly it took 15 months for the US to win back the Alaskan islands of Kiska and Attu. Many lives were lost, and homes destroyed. What were once peaceful villages and beautiful islands where decorated with blood shed, fires and bombings.

I felt that Samantha did an amazing job on educating me about this invasion. It was evident to me that she did a lot of in-depth research in order to tell this story for all sides. As a reader, I liked that she was able to make this personal to me by introducing to me a new person during each chapter of this book by given their account from the war, and how their role tied into this invasion. Samantha's use of personal stories, in-depth research, historical records, maps, photographs brought out a wide arranges of emotions for me while I read this harrowing account of the war. Samantha didn't miss a beat with her vivid and often times, harsh descriptions of what the Japanese soldiers did to their American captives, the cruel, and often times unbearable Aleutian weather, how American POW's were treated and the bloody battle that ended Japan's invasion. Not to mention how America ended the war.

Over all this is a story I'd recommend to those who are interested in learning more about WWII. This non-fiction story is educational and very informative. It's a well written, well researched book that gives a detailed account about an invasion that never should have happened, and the consequences that followed it years and years later not just for American's, but for those in Japan and through out the world.


To learn more about her book and the Aleutian War, please be sure to visit Samantha's link here.
Posted by Mundie Kids at 7:59 AM Labels: 4 stars, Book Review, Ghosts in the Fog The Untold Story of Alaska's WWII Invasion, Samantha Seiple, Scholastic