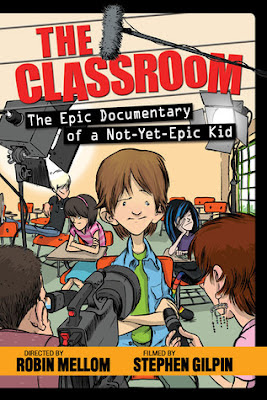 By: Robin Mellom
Illustrated by: Stephen Gilpin
Published by: Disney Hyperion
To Be Released on: June 19th, 2012
Source: ARC from author/publisher to review
Ages: 9 & up
5 stars: I Loved It!
Pre-Order from: Amazon | Barnes & Noble

In 2012, a documentary crew descended upon Westside Middle School to detail the life of an average seventh grader and his classmates. What they uncovered, though, was far from average. Mostly, it was upper average along with moments of extreme average, highlighted by several minutes of total epicness.

This is the story...

Trevor Jones--perfect attendance award recipient, former neurotic (he hopes)--has been preparing for the start of seventh grade his entire summer. But he is NOT ready for the news his best friend, Libby (proud neurotic, in a color-coding sort of way), drops on him: he must ask a girl to the fall dance. By the end of the day.

Trevor decides he would rather squirt hot sauce in his eyes than attend the dance. Everything changes when he meets mysterious new student Molly (excessive doodler, champion of unnatural hair colors). Trevor starts to think that going to the dance maybe wouldn't be the worst thing ever. But what if she says no to his invitation? More important, what if she says yes?! -quoted from Goodreads

A fabulously written, relatable middle grade coming of age story, The Classroom is a hysterical read with witty, well grounded characters and a quick, engaging plot line. It's been awhile since I've read a truly fun book, and Robin Mellom's middle grade debut is just that! With a documentary crew descending on Westside Middle School to document the life of an average 7th grade boy as he learns to navigate his way through MS, Robin was able to give a creative writing spin to her book by telling it from a documentary point of view. This not only allows readers to get to know the main character Trevor better, she also introduces readers to a variety of other characters through various interviews that take place in the book.

Trevor is a character I think a lot of people will relate to. He's hit that awkward stage where you reluctantly leave behind some of your "childhood" tendencies and learn to deal with a more mature scene in middle school. If that wasn't hard enough, learning to navigate your way around middle school for the first time isn't fun, and nor is learning how to fit into a new crowd. What Trevor deals with and learns to cope with are things adults will get, and young readers will be able to relate to. It's not just Trevor that readers will understand, but the rest of the characters who now make up Trevor's social scene.

Libby, who's Trevor's best friend is a a little bit neurotic and started off the story in a surprising way. Having grown up with Trevor all their lives (they're now 7th graders), they've done everything together. Being that Trevor tends to get himself in awkward situations, Libby has decided that this year they need to make new friends. I kind of got her point, but poor Trevor is forced to quickly learn to rely on himself vs is best friend. Be rest assured, there's a fabulous message about friendship in this story, and these two are still best friends. There's also the good looking 8th grader who thinks he's above everyone else, the beefy 8th grader, who surprised me with how "nice" he is to Trevor, the know it all and the mysterious new girl, Molly. I loved getting to know each of these characters more.

The Classroom Room is brilliant, funny and relatable for all ages! Robin tackles all the different emotions that kids experience starting middle school. I felt like she nailed the experience of "growing up" perfectly in this book, but she also kept it light hearted and fun. Through each of the characters, readers will be able to connect with their worries, fears, triumphs, understand their motives for their actions, and get what they're thinking. Each character is striving for something different during the course of this book, and Robin does a brilliant job at allowing the reader to see that and get it. I highly recommend picking this book up when it's out next week! This is a book that's not just for middle grade readers, but for parents and teachers alike. Robin Mellom's creative writing style and down to earth, realistic characters will definitely leave readers wanting more when they're done with this book. This is a read that older elementary and middle grade readers will love.

Thank you to Robin and Disney, I have a few spreads from the book to share with you guys. It's not just the story that made the book, but the Stephen Gilpin's illustrations that are featured through out the book. They're fabulous. Here's a sneak peak into the book: 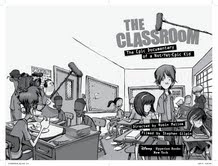 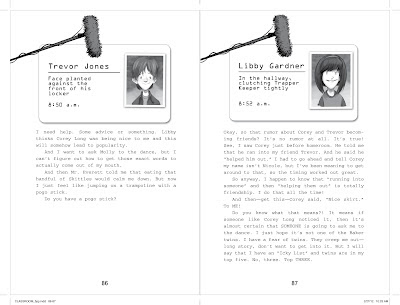 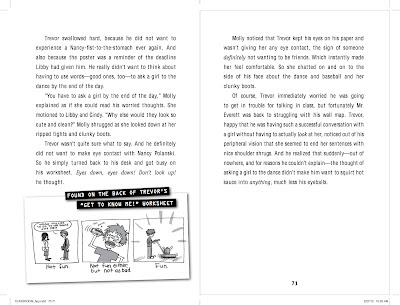 Thank you to Robin and Disney, I also have an ARC of The Classroom to GIVEAWAY! To enter, please leave me a comment, along with your email address. Open internationally. 1 entry per person and those under 13 yr old need to have a parent/guardian's permission to enter. GOOD LUCK!