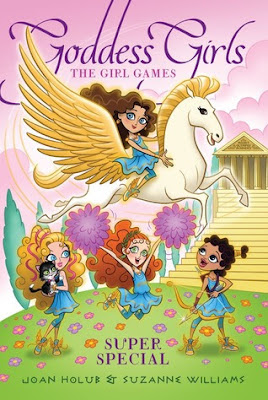 The first-ever standalone superspecial in the Goddess Girls series—let the games begin!Athena, Medusa, Artemis, and Persephone are sick and tired of being left out of the annual boys-only Olympic Games. Their solution? The Girl Games! But as the Goddess Girls work to make their dream into a reality, they come up against plenty of chaos and competition. Told in alternating points of view, this superspecial is packed with Olympic spirit!

Just in time for the Summer Olympics in London, fans of The Goddess Girls will love diving into this special summer hit!

What could be more exciting to the Goddess Girls series than a book that focuses on Olympic style games for the girls. Though this new release is a stand alone, fans of this series will be sure to enjoy every moment of this exciting story line. Told from alternating points of views, this story stays true to everything I have loved about this series and introduces some new characters and fun twists. This story also introduces fans to the lovable Adonis, the adorable little kitten seen on the cover of the book.

Being a huge fan of the Olympics, I love that this storyline focuses on the Olympics, girl style. The girls have come up their own creative games complete with pink sand to jump into and beanbag animal hand offs in the rely races vs the batons. Honestly I wouldn't have expected that any other way. Of course not everything will always go as planned, and with more than just the girls at Mount Olympus Academy competing, there's more than just winning at stake. Don't worry fans, the boys are all present in the story as well. What would the games be without a little help from them.

One of the things I enjoyed the most about The Girl Games is the story telling. Not many authors can pull off telling a story for multiple character points of views, but Joan and Suzanne have done a superb job doing so. They not only allow their fans to get to know their characters more, but they make it fun, and easy for readers to distinguish between each narrator. Whether we're following Artemis as she's trying to do it all to get everything ready for the Games, or Aphrodite and her newly found kitten, Adonis, Persephone, Artemis and Aphrodite all learn a few lessons about friendships and some friendly competition.

True to the Goddess Girls style, there's also plenty of sweet romances, lessons learned about friendships, and a lesson or two learned about some "friendly" competition. Goddess Girls: The Girl Games, Super Special is a book I HIGHLY recommend picking up. It's one that can easily be read as a stand alone, as much it's a book the fans of this series will love. As I've said with each of these books, I HIGHLY recommend this series for young readers!
Posted by Mundie Kids at 10:46 AM Labels: 5 stars, Aladdin, Blog Tour, Book Review, Goddess Girls, Joan Holub, Super Special, Suzanne Williams, The Girl Games, The Goddess Girls Series

Rise of the Guardians: Movie Trailer

Rise of the Guardians is an awesome MUST HAVE middle grade series by beloved children's author, William Joyce. This fall, Dreamworks Animation is bringing his imaginative world to life with their movie: Rise of the Guardians. Check out the trailers below (one of which I posted previously on the blog), and you'll see why my kids and I have already got this release date marked on our calendar and are planning on hitting theaters on it's release day.

And check out the second trailer for the movie:


This start studded cast includes the voice talents of:

You can find out more here: