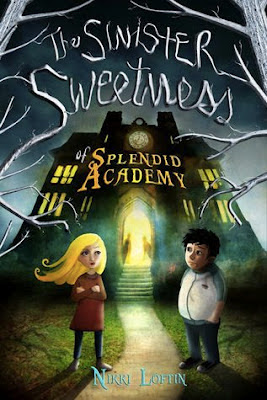 By: Nikki Loftin
Published by: Razorbill
To Be Released on: August 21st, 2012
Source: borrowed ARC from friend
3 stars: A Good Read
Pre-Order from: Amazon | Barnes & Noble

Lorelei is bowled over by Splendid Academy--Principal Trapp encourages the students to run in the hallways, the classrooms are stocked with candy dishes, and the cafeteria serves lavish meals featuring all Lorelei's favorite foods. But the more time she spends at school, the more suspicious she becomes. Why are her classmates growing so chubby? And why do the teachers seem so sinister?

It's up to Lorelei and her new friend Andrew to figure out what secret this supposedly splendid school is hiding. What they discover chills their bones--and might even pick them clean!
Mix one part magic, one part mystery, and just a dash of Grimm, and you've got the recipe for a cozy-creepy read that kids will gobble up like candy. -quoted from Goodreads

The Sinister Sweetness of Splendid Academy is a good, dark middle grade read with a fabulous mix of fairy tales and folklore, The Sinister Sweetness of Splendid Academy takes readers on an unforgettable adventure, and introduces them to a world that's just as enticing as the one Hansel and Gretel are in. This story is a little darker than some of your average MG books, but it's still none the less one that some children will enjoy reading. One of the things I liked about this book is the way in which author Nikki Loftin was able to tackle some tougher subject middle grade and adult readers can relate to, while still giving her story a fun, paranormal twists to it. I really admire an author who's able to mix both realistic emotions and circumstances with those of make believe, and make it realistic.

I love a good fairy tale retelling, and Nikki's story is one that gives an interesting spin to a beloved classic. She takes things one step further by setting her story at the delicious Splendid Academy. Here the students are given all sorts of delicious foods and treats, and never want to stop eating. Something sinister is definitely going on and it takes a lot of will power for young Lorelei and her friend Andrew to get to the bottom of all that's going on. From blue sand to the delicious food served during the mandatory meal times at the school, something isn't adding up, and the truth might be harder to digest than they thought. Splendid Academy isn't sweet, and something dark and evil is happening behind this school's walls, but just what that is, is hard for the students to pinpoint.

Despite the engaging writing, and enchanting world building, I had a hard time connecting with the main character, Lorelei. I sympathized with all the emotions she's still dealing with after losing her mom, and now dealing with a wicked stepmother who's the opposite of lovable. I felt bad for her and at the same time, I sat here and cheered her on with all she's trying to deal with, over come and get answers to. In the end there was just something I couldn't connect with, with her and I can't even pin point exactly what that is. I felt a little more drawn to hear partner in crime Andrew, than I did with her. Andrew's one of those kids who can't help but root for!

Even though the characters are usually a big deal to me in the storyline, Nikki's clean cut writing, authentic fairy tale spin, and well written paranormal elements made this a good read for me. And I give her huge kudos for tackling tough issues that kids deal with on a daily bases, and will relate to in this book. I like that Nikki was able to incorporate issues kids in the book's targeted age group will understand like emotional issues, over eating, peer pressure, bullying, family problems/concerns and being overweight. Some of the darker tones in this book might be a little much for younger MG readers, but I think this is book older MG readers will really enjoy.
Posted by Mundie Kids at 12:47 PM Labels: 3 stars, Book Review, Nikki Loftin, Razorbill, The Sinister Sweetness of Splendid Academy