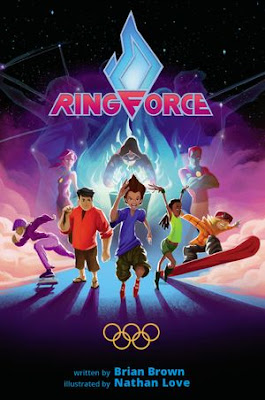 
When you believe in your dream … all is possible.


That was the message on the poster hanging on Booker’s bedroom wall—the poster of the greatest boxer of all time, Olympic gold medalist Muhammad Ali.

Booker dreamed of being an Olympian too. He was fast. Really fast. Sometimes he could even outrun the elevated train as it roared by on the platform outside his apartment building.

But little did he know when that freakish snowstorm hit Brooklyn one sunny spring day, his incredible speed would lead him to a destiny greater than he ever could have imagined: a chance to join an elite force fighting for the hopes and dreams of the whole entire world. -quoted from NBC Publishing's site

An engaging, fun read to get your kids ready for the Olympics, RINGFORCE is an exciting new book that kids of all ages will enjoy. This book isn't just about the adventure of 5 young kids who are thrown into a mission to keep the Olympic torch going, and to save the world, it also sends kids an extremely powerful, and positive message about the importance of "Following Your Dreams". I loved the author Brian Brown's experience with working a vast number of Olympic events played a big role in his ability to capture his readers attention, and teach them about Olympics, and as well as giving his readers a positive story line that will uplift and motive them.

RINGFORCE follows the story of a young kid named Booker. That's not his real name, but a nick name he earned from the time he was little, because of his ability to run incredibly fast. Booker's a kid who's strong and brave, and someone who's still reeling from the death of his dad. In trying to cope with the way things are now, he often refers back to the influence his father had on him. He not only instilled in him the pride that comes from his Latino heritage, but he encouraged to learn about the men and women who never gave up on their dreams, and made history in the various Olympics. His dad taught him to believe in himself and in the power of hard work. He also made sure his son understood the importance of "When You Believe In Your Dream... All Is Possible". A message that rang true throughout this fast paced, entertaining read.

One of my favorite parts of this book is when Booker finds himself among some greats on Mt Olympus. There, he and four other kids from each of the countries that the Olympic rings represent, are coached along with kids from each of the 209 countries who send delegates to the Olympics. It's Booker and his 4 new friends who learn and have only begun to understand the importance of their roles in this new world, and how they will help in saving the world. The fact the this book takes place in both the real world, and in a make believe/historical place make it all the more intriguing. It's truly a fantastic blend excitement, action, and that pride that comes from watching (or in this case reading), about anything and everything related to the Olympics. I highly recommend picking this book up! I'm looking forward to reading more from Brian Brown.
Posted by Mundie Moms at 1:58 PM Labels: 2012 Debut Author, 4 stars, Book Review, Brian Brown, Nathan Love, NBC Publishing, RingForce, Rodale Publishing