The Familiars- Circle of Heroes: Interview with Adam and Jay

I am thrilled to have Adam and Andrew on Mundie Kids today to celebrate TODAY's release of their third book in The Familiars series, Circle of Heroes. Before I share my interview with Adam and Andrew talking about heroes, I wanted to share a little bit about their book. 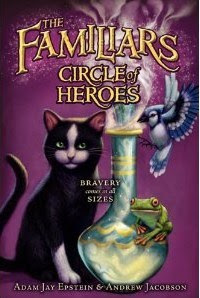 Can the familiars bring magic back to the queendom?Vastia is in a state of war. Led by the evil Paksahara, whose command of the Shifting Fortress gives her nearly unstoppable power, an army of undead animals is wreaking havoc on the queendom. With human magic still gone, it's up to the three prophesized familiars—Aldwyn, Skylar, and Gilbert—to capture the fortress and bring Paksahara down.But it won't be easy. The three familiars must embark on a quest to gather seven descendants of the most ancient and powerful animals in Vastia. And to make matters worse, Aldwyn finds a troubling scroll that causes him to doubt the very truth of the prophecy that guides them.With inventive magic, epic action, and laugh-out-loud humor bursting from every page, circle of heroes is an extraordinary adventure you won't want to see end - quoted from Goodreads

Adam and Andrew - With the release of the third book in The Familiars series, The Familiars - Circle of Heroes, we are stopping by some of our favorite blogs discussing all things heroes.

MK: Hi Adam and Andrew, thank you for stopping by Mundie Kids today! Your series, The Familiars, has a lively cast of amazing heroes. If you were a character in your series, what animal would you be and what power would you posses?

Adam - If I could be any animal in the Familiars, I would choose to be a teleporting wombat. There are so many places that I would love to visit and traveling isn't always easy. Being able to teleport would make it a snap. Plus Wombats are so cute.

Andrew - I'd love to spend a day in Gilbert's webbed feet. He can see the future in pools of water, and that seems like a talent that could come in pretty handy. Certainly with the stock market, anyway.

MK: Aside from having a fabulous side kick, what are some other things you think a young hero should have?

Adam - A young hero should always have a dead parent with a mysterious past and an all powerful adversary that wants to kill him above all else. Oh, and a weapon that he hasn't learned how to wield yet.

Andrew - I think Adam pretty much covered that one. Some good wisecracking one-liners never hurts, either.

Adam - I loved Bink from Piers Anthony's A Spell for Chameleon and Mark Twain's Tom Sawyer. Also Encyclopedia Brown. There are too many to list. And I  am really excited about a new hero we will be introducing this fall from our book Starbounders: Zachary Night.

Andrew - Of late, I'd have to say Harry Potter is tough to beat. He's kind of got it all.

MK: My favorite comic hero from growing up is and will always Wonder Women. I have to ask you guys, who is your favorite marvel comic book hero? Why?

Adam - My favorite Marvel comic book character is Dr. Strange. I love the way that he speaks and that he has magic. There was something wonderfully unworldy about the diabolically devious denizens of Dr. Strange.

Andrew - I'd say Spider-Man. I could really believe that his story could be my story. Average, nerdy kid (definitely relatable) turns superhero.

MK: What is your definition of a hero or what do you think makes someone a hero?

Adam - A hero is someone who will sacrifice something important or risk their own lives for others. Whether you have superpowers or a super heart, anyone can be a hero.

Andrew - What he said.
*******
We want you to send in stories about your own heroes, the real people who have had an impact on your life. Parents, grandparents, teachers, or friends. We'll be featuring them on our blog, our Twitter feeds, and our Facebook page. We want to know who's in your Circle of Heroes. The ones voted the most inspirational will win a signed copy of book #3. Send them in tothefamiliarsbook@gmail.com!

The Familiars - Circle of Heroes will be on-line and in bookstores everywhere September 4th.