It only seem fitting that today I share my 5 star review for the creator behind Marvelous Middle Grade Monday, Shannon Messenger's debut, KEEPER of the Lost Cities. You can read the entire tour stop HERE and enter to win an ARC of Shannon's YA debut, Let The Sky Fall. Stop back by later this week for a KEEPER giveaway and character interview here on Mundie Kids. 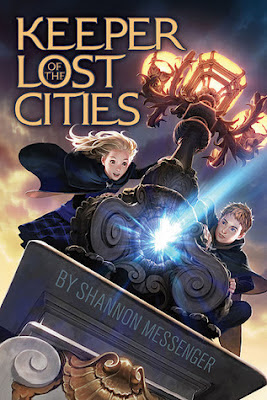 This is why I love Middle Grade reads! Shannon Messenger's debut is fantastic! There's plenty of adventure, some snark, a lot of fun, and a mystery to be solved. Did I mention there might be a little bit of danger?

I love a middle grade book that gives me a richly detailed story, world and characters to fall in love with. This book exceeded all that, and then some. One of the things that makes KEEPER's stand out is Shannon's writing. I didn't feel like I was reading a middle grade book. I felt like I was introduced to an incredible world were I met some unforgettable characters and went on a totally awesome journey with them. Oooh and there's also this really, really cool thing that Sophie can do, but I can't tell you what it is. Okay, it's not just Sophie, but some of the characters of these really amazing powers that tie into the secrets that get revealed in this book.

You can't go on a fun adventure and not have fun characters right? The characters are so much fun to get to know, and really made this book amazing for me. Sophie, our main protagonist is a young character I think readers are really going to love. She's someone who's incredibly bright, she has this amazing ability, and she's also someone who along the way in discovering more about herself and a new world she never knew existed, makes a mistake or two. Her discovery and her growing into the person she is by the end of the book was only half of what I loved about Shannon's debut. The other half might have to do with the guys that become apart of Sophie's life, Keefe, Fitz, and Dez. Let's just say the story livens up a bit when they're around and I might have pledged myself to Team Keefe!

When I think of middle grade books I think back to those stories that excited me and took me to places that existed along side my the world I lived in. They allowed me to take incredibly journeys, expanded my imagination, moved me in some way, made reading fun, and enjoyable, and introduced me to some characters and worlds that are still with me today. I feel like KEEPER of The Lost Cities is one of those books. It's going to be on of those books that just excites many of it's young readers and reminds it's older readers why we fell in love with reading in the first place.  Not that anyone can replace Harry Potter, but I think parents who are looking for another book series they can read and connect with their kids on some sort of level with will find they can do that with Shannon's KEEPER of the Lost Cities.

If you weren't a fan of middle grades, you will be after your read KEEPER. I LOVE this book! It's one of my all time favorite MG books, and will be at the top of list of favorite reads at the end of this year. I HIGHLY recommend picking this book up when it's out tomorrow.
Posted by Mundie Kids at 10:32 AM Labels: 5 stars, Aladdin, Blog Tour, Book Review, Keeper of the Lost Cities, KEEPER OF THE LOST CITIES BLOG TOUR, Marvelous Middle Grade Monday, Mundie Kids Giveaway, Mundie Moms Blog Tour, Shannon Messenger