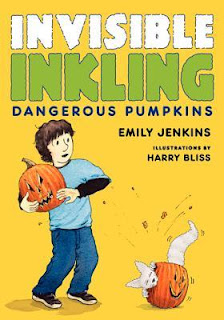 
It's Halloween. Fourth grader Hank Wolowitz "hates" Halloween. Every year his older sister, Nadia, scares him half to death.

This year might be different, though. After all, Hank's the only kid in Brooklyn--probably the only kid in North America--with an invisible bandapat living in his laundry basket. And Invisible Inkling "loves" Halloween. Pumpkins are his favorite food.

But Hank has serious trouble stopping Inkling from devouring every jack-o'-lantern in their neighborhood. And that's not his only problem: Will he figure out a cool costume? Will he survive the small army of ballerinas roaming the hallways of his building? Will Hank ever get revenge on Nadia?

Inkling has long since stopped listening to Hank's worries.

This  a fun Halloween read following the misadventures of 4th grader of Henry Wolowitz, and his pumpkin eating invisible Inkling. Unfortunately for Henry, his invisible pet has discovered how delicious pumpkins are, and this not only spells trouble for Henry, it gets him into a situation or two that only his Inkling can get him out of. I think this a Halloween read readers in second grade and up will enjoy. They'll laugh along with the different situations Henry finds himself in, how he gets out of them, and how he's coping with having an invisible pet that constantly gets him in trouble. If only Henry would just speak up and tell the truth.....but who would believe a kid when he says his invisible inkling did it? Certainly not his own mother, his Sister or even some of his friends.

Emily's writing not only makes this book an easy one to read, but her writing is such that readers will be able to relate to Henry on a few different levels in regards to how he feels, how he's treated, what it's like having an older sister you don't always get a long with and dealing with people saying the not so nicest things about you all the time. Henry his a lovable character and I think he's one readers will enjoy reading about. The illustrations through out the book make it that much more enjoyable! This is a good read and would make a great addition to add to any classroom, personal library and school library with the fast approaching Halloween right around the corner.