Waiting on Wednesday: Wednesdays in the Tower by Jessica Day George 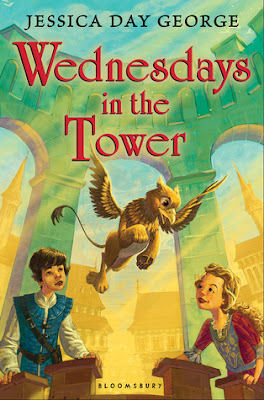 By: Jessica Day George
Published by: Bloomsbury Kids
To Be Released on: May 2013
Pre-Order it from: Amazon | Barnes & Noble
Add it to Goodreads

A castle that is constantly rearranging itself, and a young royal family sworn to protect it... Celie, Rolf, and their beloved Castle Glower are back in this exciting sequel.

Strange things are afoot in Castle Glower: new rooms, corridors, and even stables keep arriving, even when they aren't needed. Celie's brother Bran, the new Royal Wizard, has his hands full cataloguing an entire storeroom full of exotic and highly dangerous weapons, while Celie has her hands full . . . raising the creature that hatches from a giant egg she finds! Will they be able to find out what's making the Castle behave this way in time?


A castle, adventure, and a mystery. What's not to love about that!?! Jessica Day George has been delighting readers of all ages for some time now, and I'm excited about her newest, upcoming release, Wednesdays in the Tower. I'll be featuring this book shortly here on the blog, and I can not wait to do so. If you haven't yet, I highly recommend picking one of Jessica's YA or MG books.
Posted by Mundie Kids at 9:03 AM Labels: Bloomsbury Kids, Jessica Day George, Waiting On Wednesday, Wednesdays in the Tower