A Poem As BIG As New York City: Little Kids Write About The Big Apple 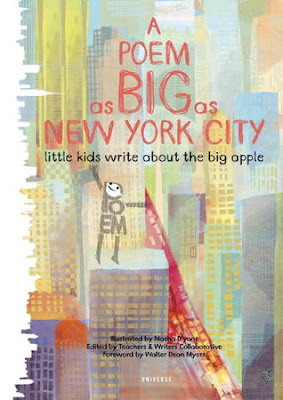 In the best-selling tradition of This is New York and My New York, this delightful book-length poem spreads the wonder and joy that is New York, as told through the words of its children. As part of an unprecedented series of workshops, New York City public school students were challenged to write about what it was like to live, learn, and play in New York City. The poems were collected and edited into this book. Their words provide readers of all ages an honest, kid’s-eye view of the melting pot of cultures, ideas, and excitement found within the five boroughs of New York City.Masha D’yans’s beautiful illustrations complement the vivid descriptions of taking a taxi through Manhattan or a subway up to the "boogie-down" Bronx, the salty seas of Staten Island, passing the family-owned stores that form the backbone of Queens, walking through Brooklyn’s Botanical Gardens, and so much more. Lyrical, heartfelt, and bursting with imagination, A Poem as Big as New York City proves that a poem can be as vast and exciting as the greatest city in the world


This is what happens when you bring a community of young writers together and ask them to express their thoughts, views and feelings about a city they all call home. What a lovely book this is! It's beautiful, heartfelt, engaging and seriously lovely! I don't know what else to say about this. The voice of each child who's poems plays a part in bringing this book together is mesmerizing. Above all, I love that this book not only embraces young writers, and poem writers, it's embraces the sense of community. The lively illustrations in this book are a perfect match for this incredible, continuous poem that tells the story of what makes NYC so unique. I highly recommend picking this one up! It's one that can be used for all ages, and in any home, classroom environment.
Posted by Mundie Kids at 7:28 AM Labels: 5 stars, A Poem As Big As New York City, Book Review, Masha D'yans, Universe, Walker Dean Meyers