One of the things I love about Middle Grade books is when two of my favorite YA (young adult) authors team up and create a middle grade series! Power house authors Kelley Armstrong and Melissa Marr have done just that, and today I'm thrilled to be apart of Little Brown's blog tour to promote their newest release, LOKI'S WOLVES. “The runes have spoken. We have our champion…Matthew Thorsen.”

While Matt knew he was a modern-day descendent of Thor, he’s always lived a normal kid’s life. In fact, most people in the small town of Blackwell, South Dakota, are direct descendants of either Thor or Loki, including Matt’s classmates Fen and Laurie Brekke. No big deal.

But now Ragnarok is coming, and it’s up to the champions to fight in the place of the long-dead gods. Matt, Laurie, and Fen’s lives will never be the same as they race to put together an unstoppable team, find Thor’s hammer and shield, and prevent the end of the world.

In their middle grade debut, K.L. Armstrong and M.A. Marr begin the epic Blackwell Pages series with this action-packed adventure, filled with larger-than-life legends, gripping battles, and an engaging cast of characters who bring the myths to life. (quote from Kelley's website)

Today it's an honor to have both Kelley and Melissa on Mundie Kids to talk about their character Owen, and the God ODIN.

The descendants of Frey and Freya, Balder, and the great god Odin. They will come, and they will fight alongside our champion.

Owen is a character we don't know a whole lot about in book 1, are you able to tell us a little bit more about what his role will be like in book 2?

Melissa: The second book is called ODIN’S RAVENS, so he’s definitely more present. He is the 4th character to have point of view. (I write him, Fen, and Laurie; Kelley writes Matt.)

Without getting into spoilers, I will say that we come to understand why he isn’t around in the first book and part of the second book; we also learn the secrets he’s known but been unable to share so far. His ravens, Thought and Memory, are also present in the second book—especially when Owen himself is away from the rest of the kids.

Owen is a descendent of Odin, one of the Gods featured in Loki's Wolves, in what way are these two most alike? What is one thing both of these characters can learn from each other, if anything?

Melissa: The characters won’t learn much from the gods themselves as the gods are dead.  Owen, however, is like Matt and Fen in that he was raised knowing about his great ancestor. (Laurie, Ray, Reyna, and Baldwin were unaware of their heritage.) He’s been aware of his future-seeing, of the ravens, and of the coming war. It’s made him more somber than the other kids, much like it did with the god. In the myths, that’s one of the reasons cited to explain why he’s drawn to Loki.  How that detail will play out in the books is explored further in the next book.

When you were creating Owen's character for the overall series, was it easy for you or a little challenging to write about the similarities he and Odin have? Where did you get your inspiration from in creating both of their characters?

Melissa: Writing Owen was challenging because he sees the future (Odin is often called the All-Father). Trying to make a character accessible without spoilering madly is hard. Fortunately, it was not completely unfamiliar: in the Wicked Lovely series, the queen of Faerie (Sorcha) is also able to see the future.  Owen was harder to write than Sorcha though because of his age.

The hardest part of writing Owen was that he has to endure one of Odin’s sacrifices. I won’t spoil it, but if you know the stories, you know what he loses. That was one of the trickiest things I’ve had to write because I know the series is for younger readers. I needed to include it, but I didn’t want to be graphic.

The inspiration for his character—aside from the myths—derives from his future-seeing: He’s lonely and under great pressures. His only “friends” (and they really are more support than friends) are the Berserkers, who use a modified type of parkour as the basis for their fight style.  As such, Owen’s appearance is influenced by the sort of fashions one can associate with parkour.

Thank you to Little Brown, Kelley Armstrong and Melissa Marr for stopping by Mundie Kids today!


About The Blackwell Pages series from the publisher:
The Blackwell Pages combines Norse mythology, magic and adventure, and is perfect for Percy Jackson fans. There are so many kids that don't know where to turn after Rick Riordan's series and we're so excited that Melissa and Kelley created this original, larger-than-life adventure. Melissa and Kelley did a ton of research for this trilogy and were actually inspired to write it for their preteen sons. 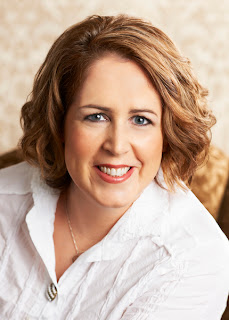 Kelley Armstrong has been telling stories since before she could write. Her earliest written efforts were disastrous. If asked for a story about girls and dolls, hers would invariably feature undead girls and evil dolls, much to her teachers' dismay. All efforts to make her produce "normal" stories failed.Today, she continues to spin tales of ghosts and demons and werewolves, while safely locked away in her basement writing dungeon. She's the author of the NYT-bestselling "Women of the Otherworld" paranormal suspense series and "Darkest Powers" young adult urban fantasy trilogy, as well as the Nadia Stafford crime series. Armstrong lives in southwestern Ontario with her husband, kids and far too many pets. (quoted from Goodreads) 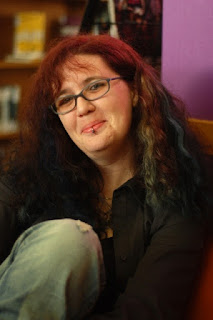 Melissa Marr grew up believing in faeries, ghosts, and various other creatures. After teaching college literature for a decade, she applied her fascination with folklore to writing.

The Giveaway:
Thank you to Little Brown, I have a copy of Loki's Wolves to giveaway! To enter, please fill out the form below.