Happy Marvelous Middle Grade Monday! Today I'm thrilled to share a guest post with you that gives you a behind the scenes look into children's publishing with Marissa Moss, who herself is an children's author, and now runs her own small press, Creston Books. You can check out the 2013 Fall press release for Marissa's upcoming releases here.

Check out these two covers for Marissa's upcoming releases: 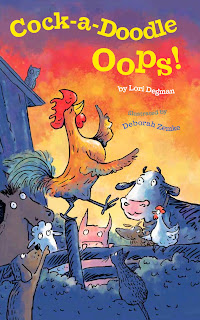 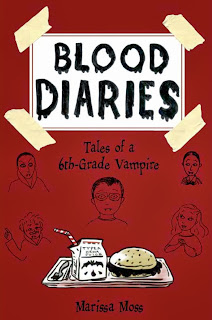 
As the fall 2013 list rolls out, believe it or not, I'm already at work on catalog copy for the spring 2014 list.  That means writing those catchy elevator pitches that will make booksellers immediately fall in love with your books.  I'm learning a different kind of writing from picture books and novels with these.  Am I beginning to think like the characters on Mad Men?  Probably not, but here are some samples, so you can judge yourself:

--When the animals on the farm hold a talent show, it turns into a spectacle of magic, drama, and comedy with Denys Cazet's pitch perfect fourth-grade humor.  (Hooves of Fire)
--Two bedtime stories in one, playing on the idea of who's reading to whom with a surprise ending. (Don't Turn the Page)
--Young readers will chant their own cock-a-doodle-oopsies with the farm animals trying to replace the vacationing rooster in this rollicking, humorous tale. (Cock-a-Doodle-Oops!)
--With her trademark humor, Moss introduces Edgar, a vampire boy who must navigate the trials and tribulations of middle school and the vampire world. It's hard to say which one is trickier, but both are funny, from type A positive "milk" cartons at school to Spoken Vampire poetry. (Blood Diaries: the Life of a Middle-School Vampire)

Do they pique your curiosity?  Do they make you want to read the books?  Am I learning how to write like an advertiser?

Another part of catalog copy is getting quotes or those handy-dandy blurbs on the back of books.  So I send layouts of the titles (since books aren't close to being printed yet!) to librarians, booksellers, teachers, and authors, hoping for some kind words.  So far, I've been lucky and people I ask have been generous with their time and support – plus I don't have to write these myself.

Here are some sample blurbs.:
For Cock-a-Doodle-Oops!:
“One. I love it!
“Two. I want to read it to the first kid that comes into the store today!”
--Luan Stauss, Laurel Book Store
“Will Farmer McPeeper ever wake up? Not without Rooster...and Rooster’s on vacation. Children will jump right in and crow along with each cock-a-doodle- baa, cluck, bleat, etc...as each animal tries in vain to wake up the very deep sleeper. This bouncy rhyming read-aloud is perfect for story time. The come-full-circle ending is sure to elicit lots of giggles.”
-- Erica Silverman, author of Cowgirl Kate and Cocoa

And for Don't Turn the Page:
“Julie Downing creates a lush, night time world, inhabited by two endearing toddlers and their loving Mamas. Someone is being read to, but in this clever bedtime story there lies an unexpected and delightful twist.”
--Ashley Wolff, illustrator of the Miss Bindergarten books

If you want to blurb future books, let me know!  I'm always looking for feedback and you'll get a finished book as a thank you.  What could be better – your name on the back of a book, plus a copy of the book itself?  You'll practically be immortal!  Plus your friends and colleagues will look up to you as a wise arbiter of literary taste.  At least, I will!

Marissa Moss grew up telling stories and drawing pictures to go with them. She sent her first picture book to publishers when she was nine, but mysteriously enough, never heard back from them. Now she’s written and illustrated more than fifty books, twenty-six of them from her best known series, “Amelia’s Notebook,” which sold more than 5 million copies and has been translated into Chinese, French, Spanish and Indonesian.

Consistently garnering starred reviews from industry tastemakers like Publisher’s Weekly, Booklist and Kirkus, her books have been named as ALA Notables and chosen for the ABA Pick of the List multiple times. She’s won the Choices Award from The Association of Booksellers for Children, Children’s Choice by the Children’s Book Council, and a Parent’s Guide Fiction Award.

Several of the Amelia titles have been on the San Francisco Chronicle’s and Los Angeles Times’ bestseller lists, and her books have been featured in The New York Times, Dallas Morning News, San Francisco Magazine, The Chicago Tribune and numerous other newspapers and parenting magazines.

Moss is an experienced speaker at various writing conferences and book festivals across the country. Her newest writing project is a middle-grade time travel series with Sourcebooks. The first released in Fall 2012, “Mira’s Diary: Lost in Paris,” and takes its heroine to 19thcentury Paris to meet the Impressionist painters. The series picks up again in spring 2013 with “Mira’s Diary: Home Sweet Rome,” which features 17th century Papal politics along with the enormously talented painter Caravaggio.

Moss proudly launches her publishing house Creston Books in 2013, aiming to bring back the golden age of children’s picture books.  She encourages authors and illustrators to do the work that’s most important to them, the kind of books that resonate deeply with children and their parents.