Welcome to today's stop in The Obsidian Pebble blog tour. Today I'm thrilled to have author Rhys A Jones on the blog. First, here's a little a bit about his book: 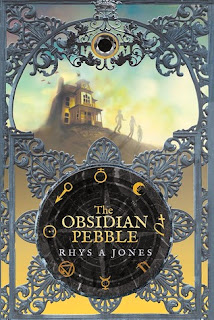 11-year old Oz Chambers lives in a haunted house (Penwurt). His mother wants to move, but Oz would rather do double algebra (yuck) every day for twelve months than leave. Where others see spooky, Oz sees wonder and mystery and aching reminders of his deceased dad. When he and his friends hear ghostly footsteps in the boarded-up dorm at Halloween, it leads to an exploration of the old place's eerie reputation. In his Dad's locked study, Oz finds a parcel addressed to him and posted  the day before his father died. Inside is the obsidian pebble, the link to all of Penwurt's astonishing secrets. Suddenly Oz begins to change; he goes from maths dunce to A student overnight and has to deal with suspicious teachers and jealous pupils. But the footsteps in the locked rooms don't go away and slowly, Oz begins to knit together the strands of lies and mystery that tie the obsidian pebble, his father and him together. What Oz hasn't bargained for is that he's not alone in that search for understanding and that solving Penwurt's puzzles lead to other, much darker secrets that will test his loyalty and his bravery to the limit.
Released on October 29th from Spencer Hill Press, you can purchase the book from: Amazon | Barnes & Noble | IndieBound and find out more about the series here.

Hi Rhys! Welcome to Mundie Kids. Do you have a favorite moment or a line from your book you can share with us?
This story combines elements of science fiction and fantasy. But what drives the story is the mystery of the old house, Penwurt, where Oz Chambers lives with his mother.  Throughout the book, Oz and his friends do their utmost to try and unravel the  puzzles and clues they uncover.  But there is a moment, after lots of false trails, where things finally come together, and all three of them share that moment.

He didn’t get any further. The slight pressure of his finger had caused the wooden block on which the symbol was carved to move inwards slightly. Ellie caught her breath, and in a second Oz had joined her to watch with barely restrained excitement as Ruff pushed the symbol in as far as he could. It slid in a full inch and stopped. Then he did the same with the alum symbol and the soap symbol. Both slid in the exact same amount and clicked to a stop.
“Oz,” said Ruff, his voice a low murmur, “I reckon you should do the last one.”
Trembling slightly, Oz put his finger on the tin symbol and pushed. This time, when it stopped moving, there was a faint but definite click, followed by a discernible creak, and the whole six-foot-by-six-foot panel in front of them gaped open an inch on one side.
“Awesome,” Oz said.
“I knew it! I knew there’d be something behind these panels,” Ruff added triumphantly.
“Ingress,” Ellie whispered in awe. “The way in.”

Which of your characters would you have been friends with growing up?
Probably Ruff Adams, the friend Oz makes when he changes schools. Ruff is that sort of loveable mix of loyalty, irreverence, goofiness and humour that is rare.  Like Oz, I didn’t feel the need for being in a crowd or a clique. And like Oz, Ruff, too, who knows his own mind when it comes down to it, is a bit of an outsider.

Which character surprised you the most in terms of the role they played in the book?
Miss Swinson, the tyrant teacher.  I didn’t set out to make her mean, but remembering my own school days and having my memories reinforced by my own children, she became a bit of a monster. Whenever I wrote things that made me wince an wonder if that could really happen, my kids would say, “oh yes, Miss so and so used to lose it like that every day”.
She is very much not the norm, but every school has one. A fish out of water with quite a lot of power to make things miserable for Oz.

What is a MG or YA book you've read as an adult that you wish you had when you were a tween?
Coraline. I enjoyed it’s weirdness and the spookiness. I can appreciate its structure and the writing, but  as a tween, I would have bought right in to the story. I was the youngest of three, by a long chalk. I had a very active imagination and the boredom due to her existence in a busy family–which leads to Coraline exploring things she ‘d be better off not exploring—was something I could relate to. My imagination has always had the volume turned right up so I would have gone with Coraline on every step of her adventure.

What is one of your favorite childhood books?
The Gauntlet, by Ronald Welch.  I must have read this when I was 9 or 10 and it really gripped me. It’s a time-slip novel, but set in Wales, in a part of the country that I knew. The reality of the history gave it an added meaning. It’s now considered a classic.

When Peter finds the gauntlet on a Welsh hillside, he becomes the latest link in an old legend. Suddenly transported back to the fourteenth century, to a world of castles, feasts, jousts, and battles, he is accepted by everyone as the eldest son of Sir Roger de Blois. Peter learns how to live as the son of a Norman lord, how to hawk, and fight, and shoot a longbow, and, finally he has to escape alone from their besieged castle to bring help. But one day he will have to return to his own time... 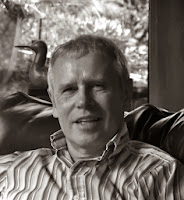 Award winning author (OMG) Rhys A Jones writes fantastic, funny, scary (is this a bit too presumptuous? By fantastic I mean fantasy, not brilliant--though I hope they are--brilliant that is), mysteries for ages 10 and up. His job is to take you where anything is possible. When he isn't writing he walks the dogs and occasionally practices medicine. He lives in an evergreen valley in West Wales with his very understanding wife. Visit the author via: Author Website | Facebook | Twitter | Goodreads